Pole Position Before and After...Work In Progress

I got the cab from Phil's arcade clearance thread over on the UKVAC forums, It came in a pretty bad state, ( As I had already seen from the photos) missing Gameboard, Dead monitor and FFFFilthy to say the least.

I have currently misplaced a whole SD card full of photos, so there's not really a lot of in progress shots of the cab being stripped and cleaned, when I find it I will update the article.

Here's the photo's from the original post, as you can see the cab it pretty dirty, Its had a switcher installed at some point along with some good butchery on the loom, The rear wooden panel that holds 2nd ARII in place was broken. No Game board Present, but I could see the potential :)


What I've done; well both ARII's have been rebuilt with new Caps and regulators, both had blown R29/30 usually due to poor edge connector connections, the power brick had the works too, with  a complete strip down and rebuild. Fuse holder, fuses, big blue and a coat of paint to tidy thing up. See photo below of the finished brick. 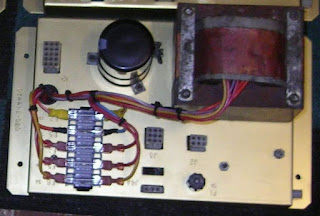 Here's some photos of the cab with all of the loom been cleaned and refitted. As you can see, the back panel still needed to be replaced at the time of these photos. But It now look a damn site better. 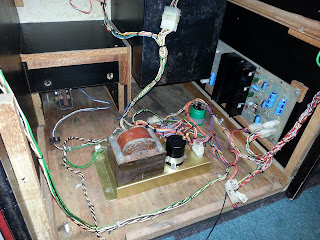 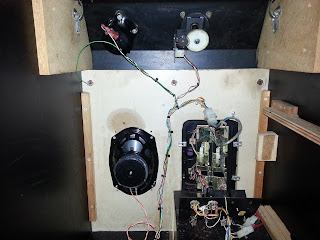 I'll be the first to admit that I'm no carpenter, but my attempt at remaking the wooden back panel didn't come out too bad. I made it from some old Ply wood that I had and coated in in black emulsion paint. I should have black vinyl, I might do this once other parts of the cab a completed.

So next up for the cab is to sort the edge connectors out as they're both badly worn out. Here's what I currently have...

Hopefully I'll have more updates in the next few weeks.