So my Hang On cab broke down when I loaned it to the last Revival show earlier in the year.... The game had been totally reliable for approximately 15 years prior to its journey to the show, well after being powered on for the morning the monitor image turned to garbage, foreground text was still visible, but the majority of graphics were a garbled mess and the game wouldn't actually start. 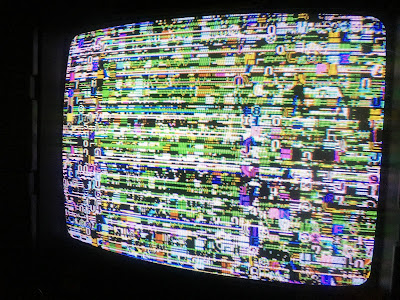 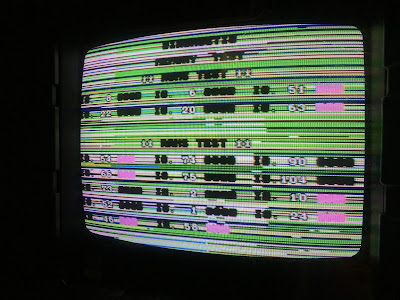 Tonight I fixed the game. First I confirmed the fault was on the CPU board, Hang-On comprises of a four board set which includes the mention CPU board, a Control/Video board and a ROM and Sound board. The game will run with Just the CPU and Control board connected, this makes it slightly easier to test whilst hanging out of that back of my cab! There are sprites and graphics missing and no sound but the game will run.

I knew the CPU ROM's and CPU RAM were working OK, The ROMS were verified and the RAM had previously been socketed so it was easy to confirm they were good.

Using my trusty logic probe I could see there was plenty of active logic across the CPU board, After looking the board over I homed in on a bank of Fujitsu 74LS157's, The Fujitsu IC's from this era of games have a reputation for going bad. Reading the schematic my understanding is that these bank of five 157's control the Address bus between the Main and Sub CPU's. All the inputs and output had active logic signals but select signal on pin 1 which decides which address bus signal should be active was stuck in a high state. 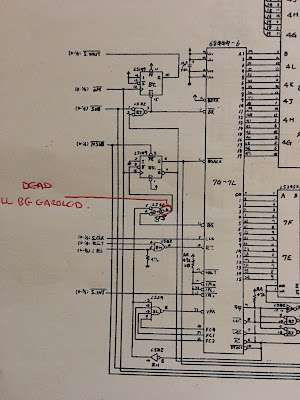 Tracing this back in the schematic, the signal comes from an LS109, Pin 3 the 'K' input was not showing as having any signal, again this was traced back to a 74LS32 at 8J (Labelled as 8H on the schematic!) Input pins 4 and 5 were active and pulsing away with data but the Output pin was showing no signs of life.. A quick piggyback test with a new 74LS32 proved this was the fault as the game screen came back good.

I removed and replaced the IC and the game is back in action.