If you didn't see some of the original pictures posted when these Fire Truck's were put on ebay a few years back, below are two photos of the cab that is now in my possession.

I decided to tackle the seat section and see how well it would clean up. The Control Panel turned out ok, next up was the main seat.

First up was the leg levellers on the cab, they were only threaded with a single nut on either side and as you can see below weren't very straight anymore they had sunk into the plywood under the load of someone heavy playing the game in its past life!

My solution to this was to put some large flat washers either side of the plywood to spread the load over a greater area. Photo below, hopefully this should now do the job better than the original.

As I've mentioned before, the artwork sides of the cab are actually a laminate which is stuck to the main plywood cab. This has now come loose and the sides are 'flapping' about. I need to glue these back on so I don't damage them when moving the cab about. This will hopefully be done in the next update.

As for the actual cab clean up, I decided to go down the T-Cut route which is a polish for cleaning cars. It turned out really well, I'm very happy with the results. Photos below:

I really have to look into getting some new T-Moulding now as this is going to let the cab down as it is pretty heavily marked. I don't want to stick the side laminate back on without removing the T-Mould so this would be a good reason to go for new and make the cab really stand out.

Also as you can see from the photos, the coin door is removed and the metal plate that connects the seat to the main cab has also been removed. I will post updates when I have cleaned and re-sprayed these items. More to come soon if the sun keeps shining, I've had a great day today working on the cab, thanks for reading.

I decided that I would get the seat section of the cab completed first, leaving the main part of the cab for a bit later in the year when the weather is better as I definitely have some woodworking to do on this section of the cab and my space indoors is limited to say the least. Anyway I thought a good place to start was on the Control panel, below is a photo of how it currently looked.

As you can see, it was pretty grimey and one of the buttons was missing a cone and it was also broken. The steering wheel also wouldn't freely spin.

Below is a close up of the wheel showing the surface rust that had built up on the wheel over the years in storage.

The steering wheel cap showed how clean the wheel could be and would have originally been. After a good scrub with a metal scourer and some metal polish I found in one of my old tool boxes it now had a very nice shine!

The wheel has cleaned up lovely the Control Panel is clean but does have some signs of rust coming through, there's not much I can do about this, but hey the machine is 34 years old so its allowed to show some signs of age.

As you can see I've replaced the broken button and put a cone on it, but I will be replacing all three so they match before the project is over. I'm assuming the front Control Panel will come clean up into a similar condition. More on that when I get to the main cab.
Labels: Arcade, Atari, CP, Fire Truck, Restoration, Wheel

After getting itchy fingers, I just had to find out if the cab was a worker or not. 20+ years of unknown history would the game fire up or maybe catch fire! I wasn't sure what parts would work and considering the mains cable had been chopped short at the back of the cab it didn't give me much hope..

I unplugged all the connectors gameboard, psu coin mech etc, and verified that they were clean and had no bent pins, I had to straighten a few pins on the interlink loom between the front and back half but nothing major seemed wrong here.

I rewired the mains lead, checked the onboard fuses. The main power switch at the back of the cab had been a casualty over time, at some point it had become good friend with wasps or bees and had become completely destroyed. so I have temporarily used some terminal block to have the cab wired in a permanent 'on' state. The back door interlock mains wiring had also worked free from the connector so this needed re-connecting.

With the gameboard disconnected, I fired the cab up and got the distinctive hum for the mains transformer, no smoke, sparks or pops. Good start! All the Power brick voltages checked out against the schematics which was good.

Time to remove the main game board from the RF cage...It turns out the board is in a very tidy condition, and looks like its never been repaired.

A visual inspection didn't show any bent pins on the underside of the board, I gently removed and re-seated all the IC's that were in sockets, and after that put the board back in the cage nearly ready to fire it up.

Before turning the cab on I need to improvise a monitor and the original on in the cab was missing. The video signal from the game was standard composite video so without too much fuss I moved in a little test monitor I have and made some temporary wiring to connect it to the original loom.

Wee the cab fired up, I got a good solid video image but something wasn't quite right. I had a loud tone constantly coming out of the speakers, and the the main playfeid graphics were messed up. The game coined up, but the game wont start properly. 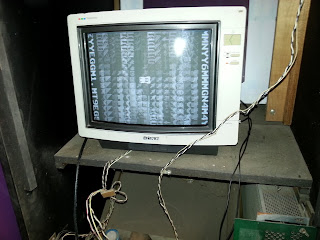 The above photo gives a better indication of what is being displayed on screen. Not great but in truth this was a better result than I had expected. I need to confirm all the cab wiring is correct at some point in the future. I tried the test mode switch which is supposed to show some gradient bars and confirm RAM and ROMs are in working order, but this doesn't seem to work. At this point I'm guessing its a game board fault, but due to the unknown state the cab has been in, I will be doing continuity test on the looms when I next get some time to work on the cab.

Fire Truck in the house! :)

Thanks to a very kind fellow arcade collector, I am now the proud owner of an Atari Fire Truck cabinet.
Originally three of them appeared on ebay a few years back as one job lot (you can see the photos in my previous post, they were from the original ebay advert)

So here it is, Atari Fire Truck. Serial Number: FT-394 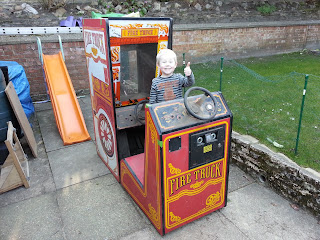 The owner who originally sold all three had them in storage for years, the collector who I bought it from had also never tried firing them up. The main casualty of the cab is the the monitor tube had been 'necked' and removed. Other than that the cab was complete but very dirty! and of course totally untested. Here's a few more photo's from when I unloaded it after making an unusually short round trip of 15 miles to collect it!

Items I've noted about the cab so far...
* The seat is made from Plywood whereas the main cab is Chipboard, Its a great shame Atari didn't use ply for both as I expect the main cab would be in 8/10 condition.
* All the artwood is made of some type of laminate which was glued onto the the cab. In places around most edges the laminate is flapping loose. This will need some contact adhesive to stick it back together.
* The two player button on the rear CPO is broken, so I'll need to find a replacement.
* One of the main sides of artwork is in a pretty poor state, I'm not sure if it was exposed to cold air or sunlight, but the paint has turned flakey. I'm not sure about the plan for this, It will probably be one of the last items that gets attention.
* The backdoor sheet which contains the self test and dip switch info had been tucked up behind the RF cage, It has small rips where it was once stapled to the back door.

More updates to come soon, I need some good weather so I can get the cab outside and give it a real good clean.