So Vic from Ten Pence Arcade Picked up a Jet fighter a while back, the Transformer in the cab was shorted so he decided to DC mod it with the help of a fellow forum member. After completing the conversion to DC Vic made a simple adapter to power the board and output its video signal. With not much luck in getting the game to show I offered to help Vic out and attempt to get the board working...

Once powered on with a 5V & 12V DC supply after converting from AC volatages we were presented with a black display on the monitor, after checking the clock signals around the board there looked like there was plenty of activity across the board.

I did a quick visual inspection and noticed that the 74165 at H4 had been inserted backwards in a socket. This was replaced ans inserted the correct way round.

No change to display.

Whilst probing around the board we found some bad outputs from a 7414 (Hex Inverter) at J9. This IC deals with input directly from the control sticks. I can't remember the exact issues but I'm guessing the inverting of signals wasn't correct on a few of the outputs.

Next I looked at the locations where the video signals were mixed together. A 7427 at C5 mixes the H Blank & V Blank signals along with 'PWR Reset' signal, this signal was low, it turns out this issue was an effect of making the DC conversion. The Power reset is triggered from a transistor which is on the AC side of the board and as we removed AC it was never triggering, well it triggered once when the board was powered up. I ended up tieing this signal to a 12MHz signal from the board (No notable side effects yet :) ), this falsly switched the reset signal and the video display now appeared. Well some of it did. We had a gray background and the scores showing but no Jets.

Part of the power reset circuit that we were now bypassing contained a 7474 at R3. This was confirmed as being faulty and replaced. Technically it is now being bypassed.

With the reset now taken it was time to find out why the Jets were missing.

This fault took me a few hours to track down.. The long & short of it turned out to be a faulty 7413 at D9. This is part of the circuit that detects when either of the player start buttons are pressed. Pin 8, the output section for the 2 player start button was stuck high, this placed a 74175 flip-flop further down the circuit in the wrong state. The 'START' signal for the game usually pulses and resets the game scores along with the Horizontal & Vertical position counters for the Jets, with it being stuck permanently on the location counters for the Jets were constantly being reset, happening so often that the video never showed on the display. When removed from circuit and checked in my IC tester it was confirmed as faulty. 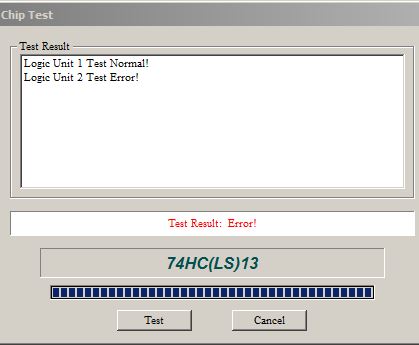 Once socketed and replaced we have Jets on the screen during Attract mode.

Finally we could now see both Jets flying but one of them (Jet 2 -  White) had constant inverted video.


Pin 6 of the 7432 at K8 was stuck low, forcing the game to think that Jet 2 was constantly being blown up. This is usually a 1 second pulse which should occur when a plane is hit from a missile. 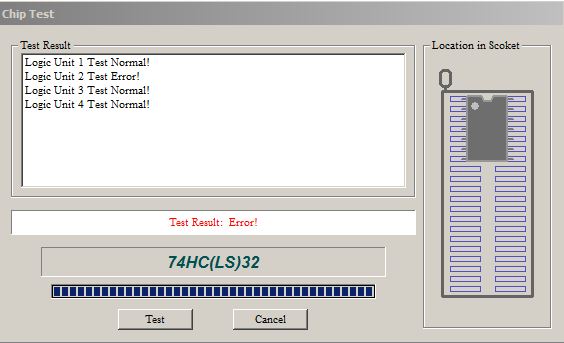 Socketing and Replacing the IC fixed this problem.

I hooked up the sound outputs to a speaker and we're certain getting game sounds. So we now have a game that looks to be working with audio & Video. Vic will fully test it when he puts in in his cab, I wouldn't be surprised if we has some small issues to deal with like Jet rotation or score counting problems which I've previously dealt with.

Short video below showing the board running in it's semi-complete state.

Strange find in my new Enduro Racer cab... So the marquee doesn't light up, lets take the monitor surround off and see what's going on,..This is not quite what I expected to see.. 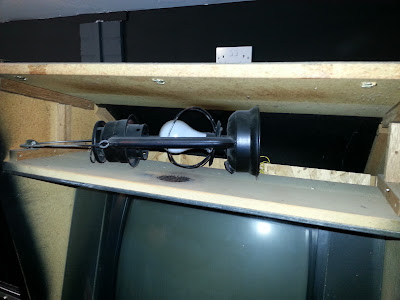 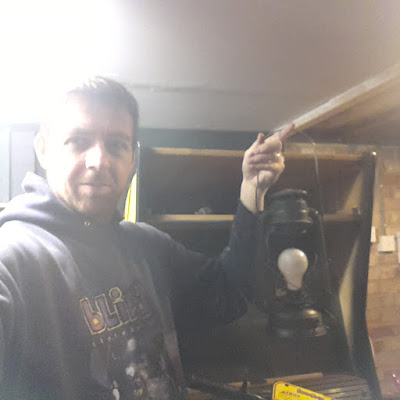 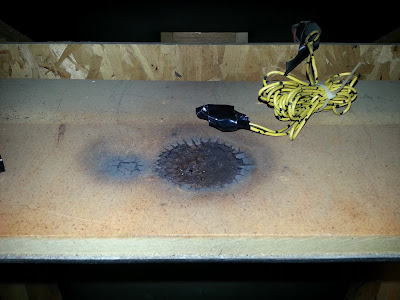 So I moved my games around today making space for a new cab and upon turning Jet Fighter back on the score for the white Jet was missing form the display. 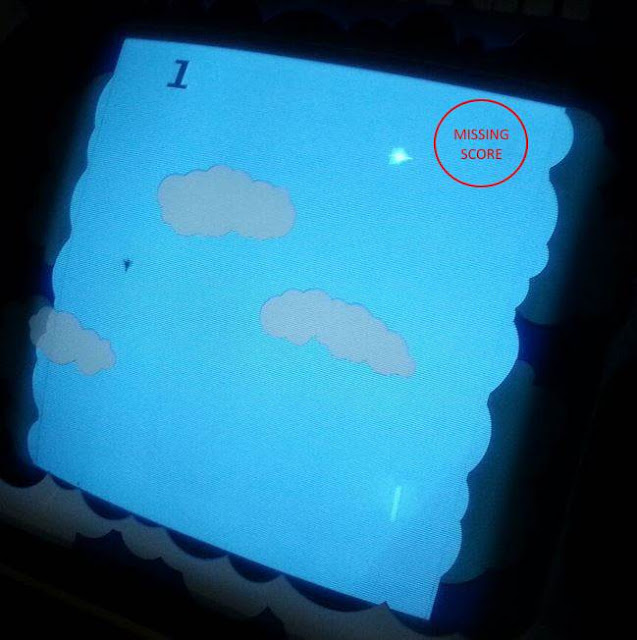 A quick browse at the schematics led me to the section below: 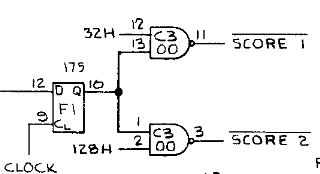 /Score1 is the Video signal for the black Jet score and it was pulsing away on my logic probe. /Score2 was for the white Jet and that output (Pin 3 of C3) was stuck high. I checked the input signals and they all looked good so I piggybacked C3 with a new 74LS00 and the score came back.

I removed the bad chip, fitted a socket and popped the new 74LS00 in and everything is working again.