Fire Truck. Racing to the Fire's

Well this is going to be the last update in the foreseeable future of my Fire Truck. It is now as complete and working as I want it to be, but there are a few items that I will come back to in the future when space and time permits. I would really like to remake the top cab panel and the two rear sections above and below the back door position. Theses parts are made of chipboard and have become slightly swollen, I'd like to replace them with MDF as I have with the new rear door and cover them in some black vinyl, similar to what was originally fitted. All the wooden edges would then line up and really top the cab off, but I'm restricted with space and now being winter I cannot work outside on the cab. 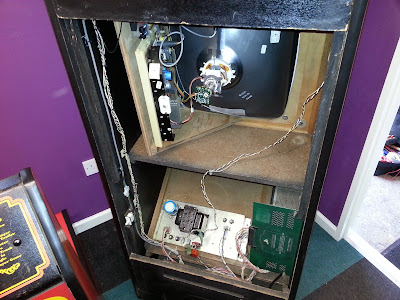 After being happy with the cab innards, It was time to make a back door to replace the rotten one that came with the cab. It had a big section missing and was in a really poor state. The main door is a single piece of MDF cut to size, with a small section which holds it in place at the bottom.

I was going to cover the door with some adhesive vinyl, but after seeing how the spray looked decided to cover the whole panel in spray and leave it at that for now. As you can see below the lock is fitted and the original Atari Information sheet was re-stapled to the inside of the door.


This next shot is a big of a tight angle but shows the door locked in place on the cab.


As mentioned above at some stage in the future I will replace the woodwork above and below the door along with the piece on the top of the cab.

The final piece of work needed to finish the cab off was to make a cardboard monitor surround. Even though my cab didn't have one, Phil who sold me the cab had one from the other Fire Truck cabs, so he lent it to me so I could make some replacements.

This was done using some heavy duty card from the Hobby Craft chain of shops and was carefully cut using multiple sharp blades, I disassembled the original monitor surround, drew round the pieces, cut them out and made the folds where necessary, finally I used hot melt glue to hold it all together.

Finally a few shots of the cab taken with a real digital camera and not my mobile phone. 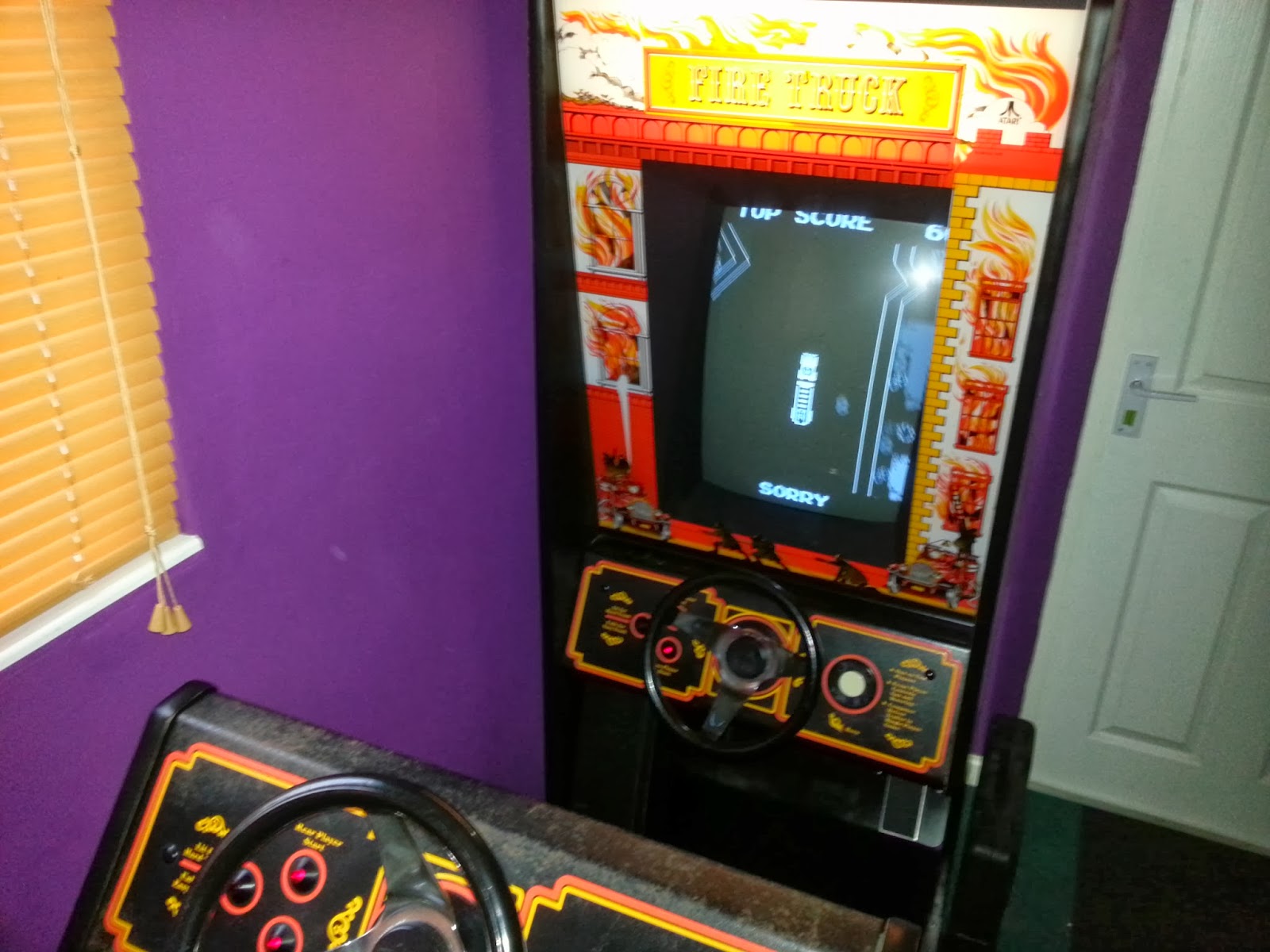 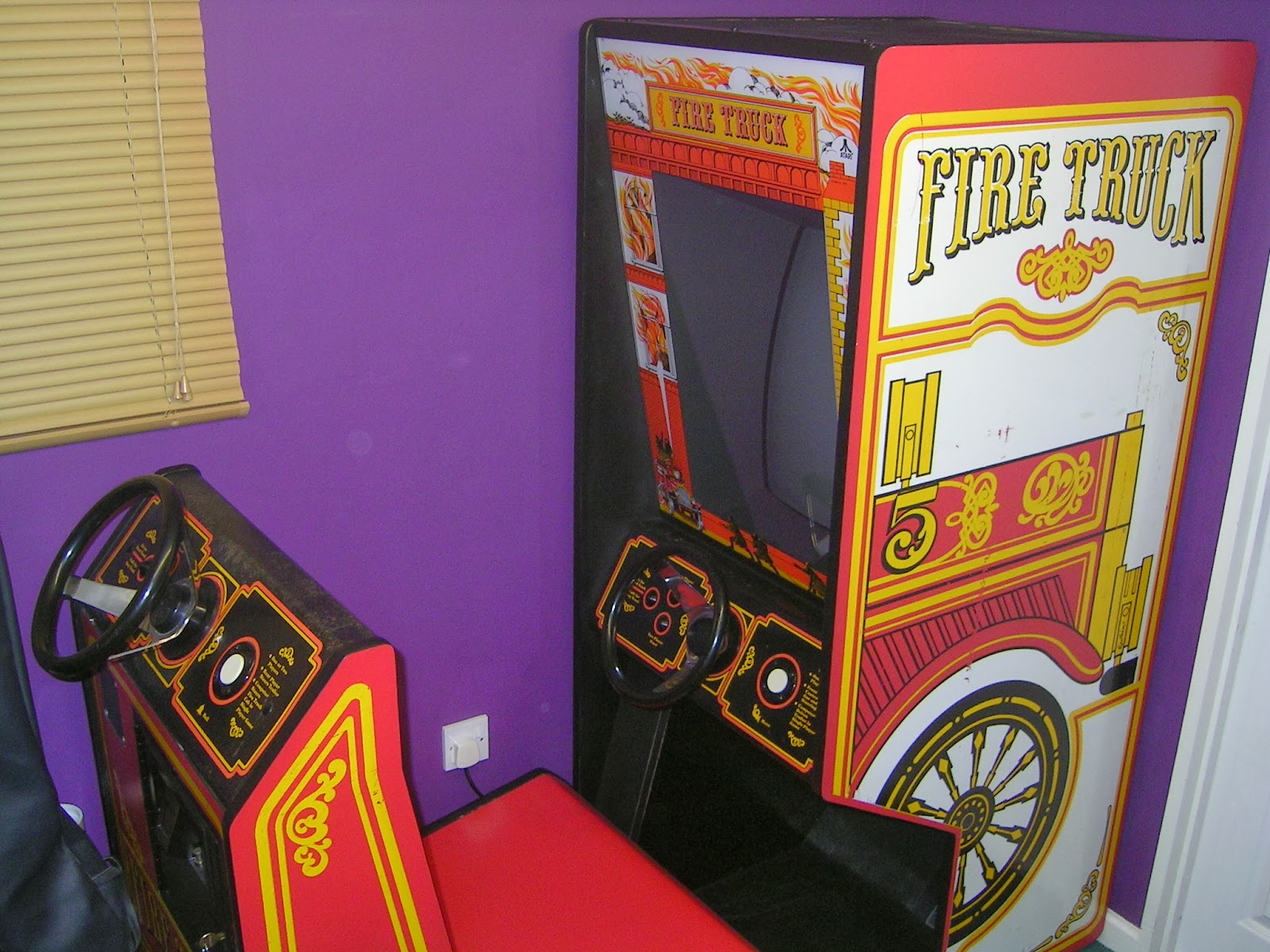 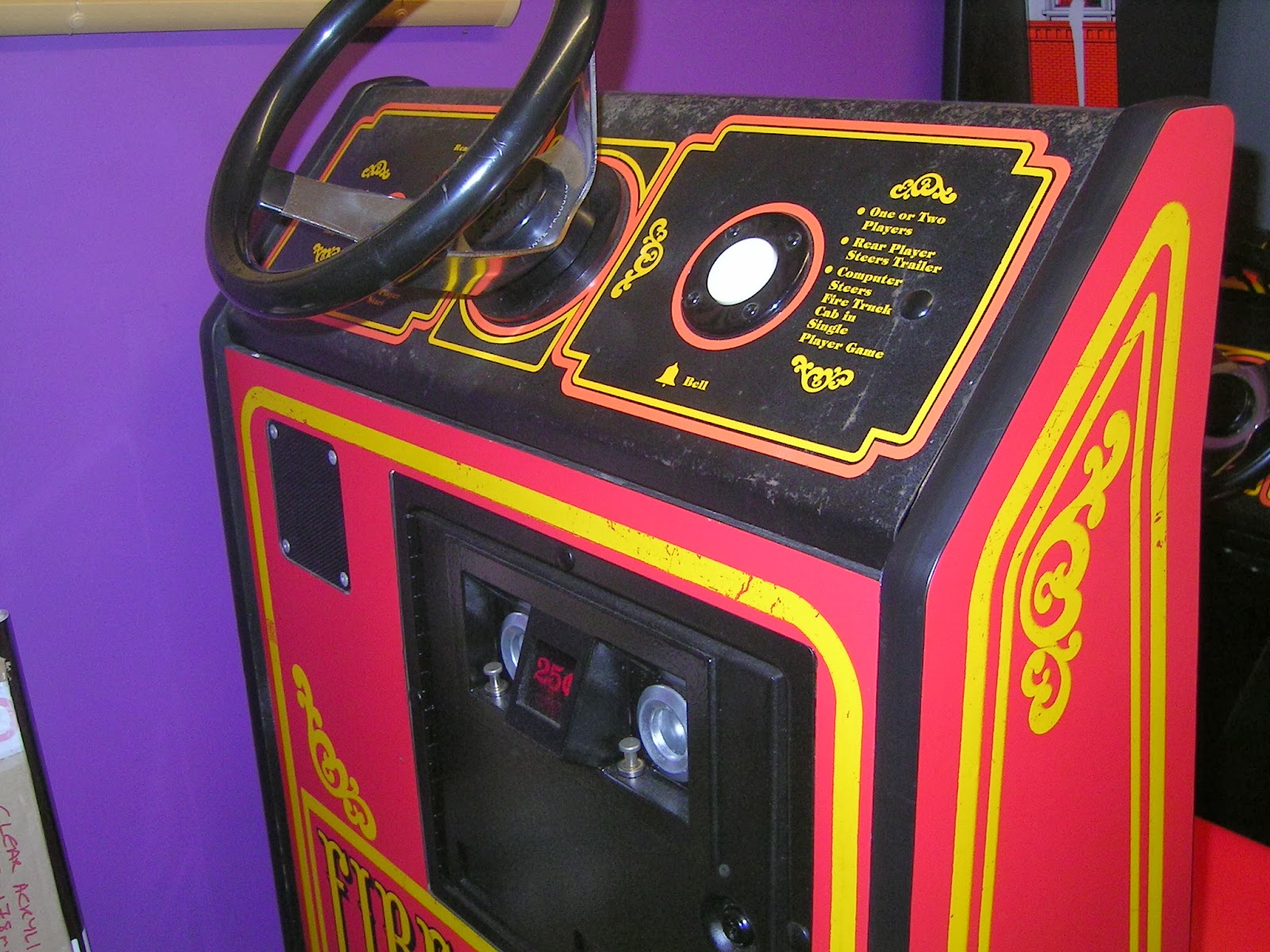 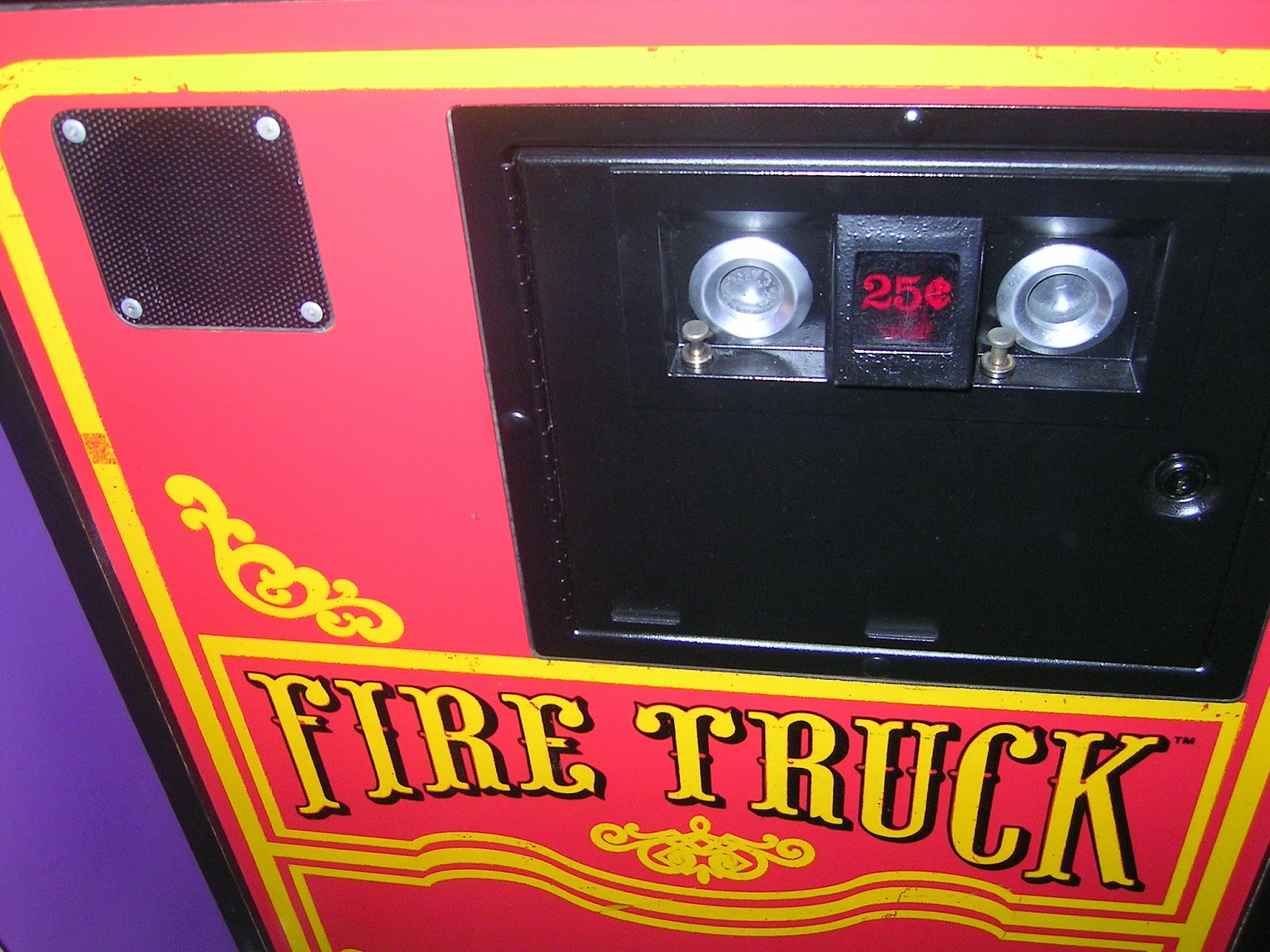 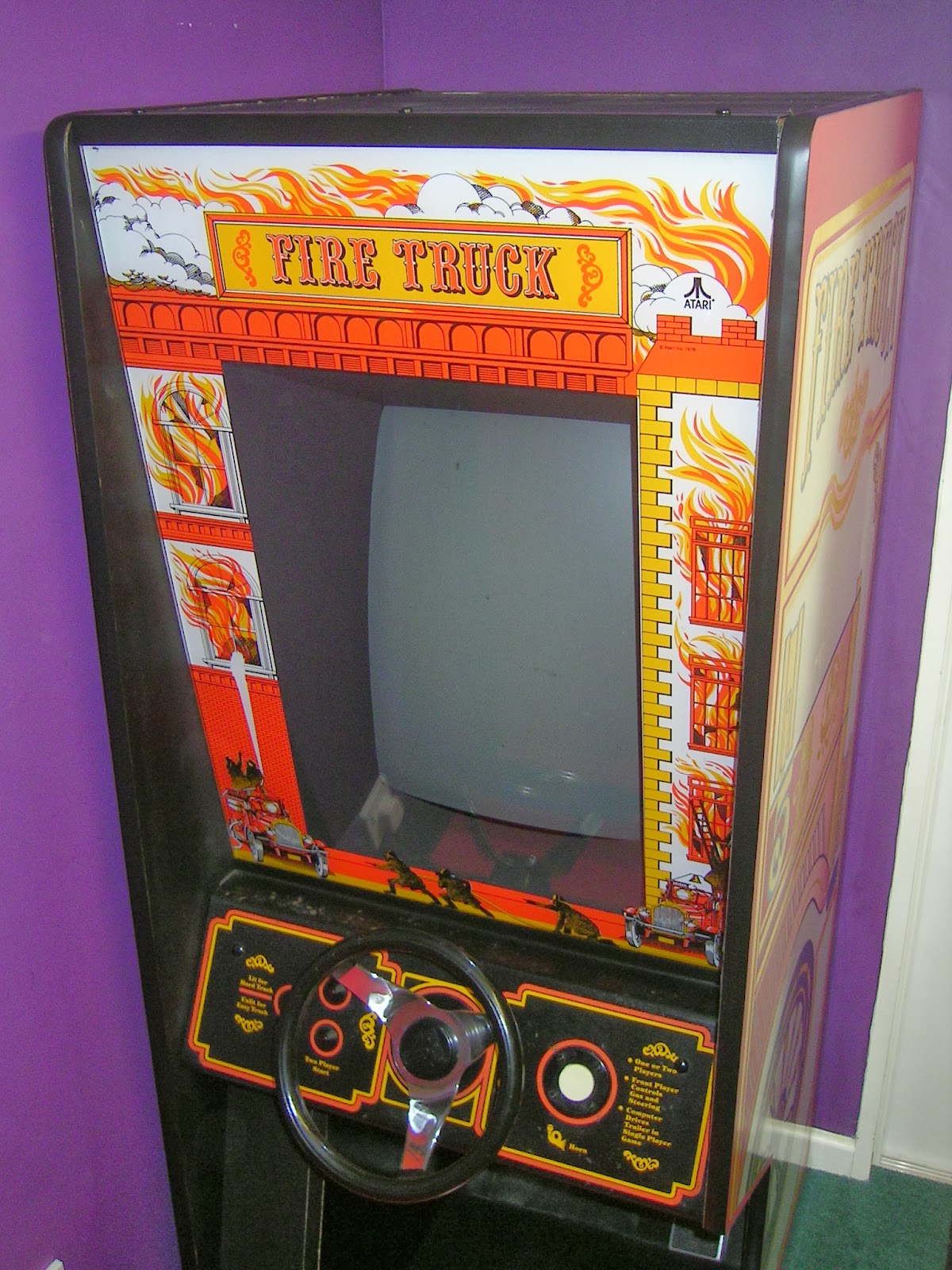 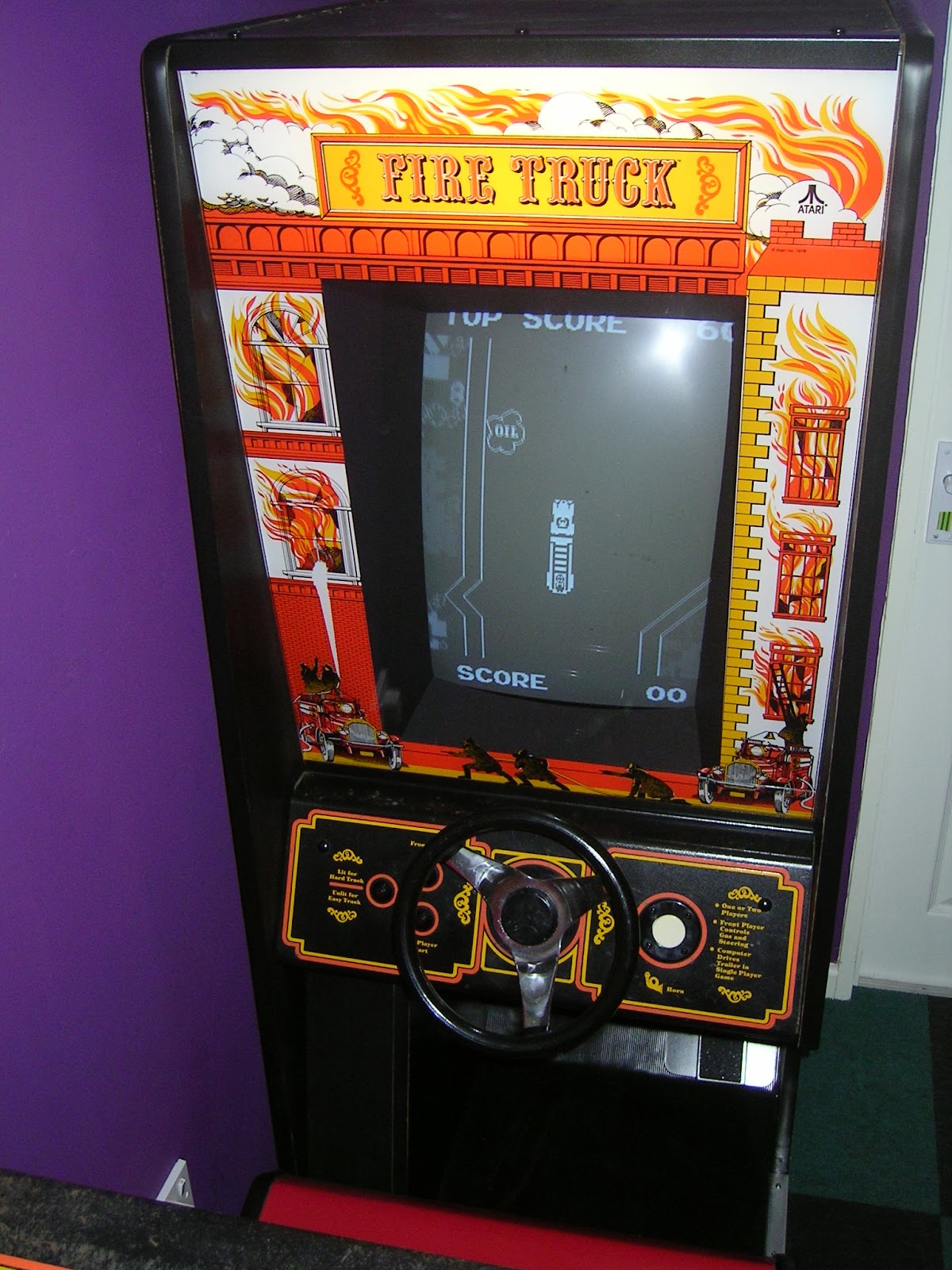 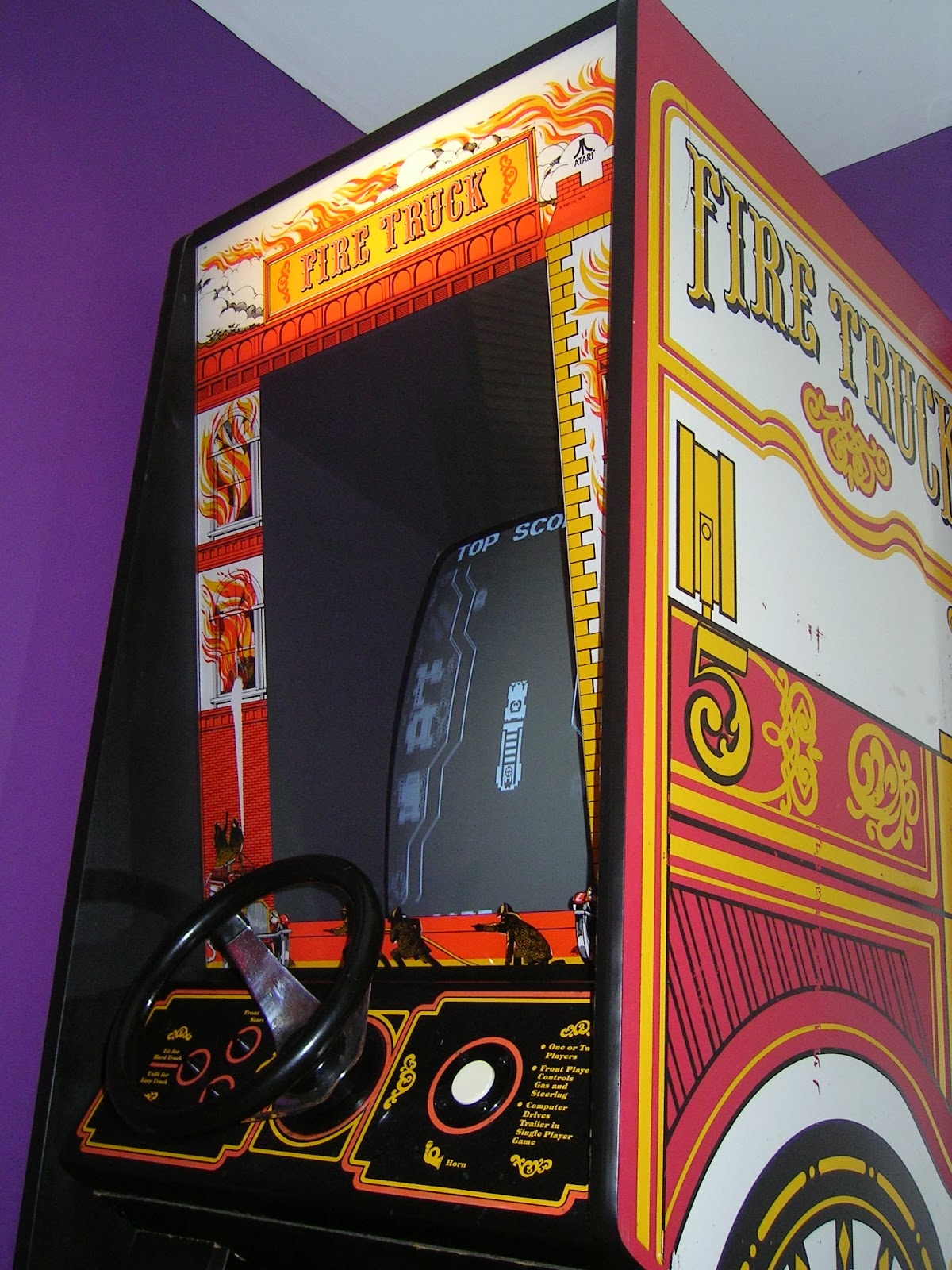 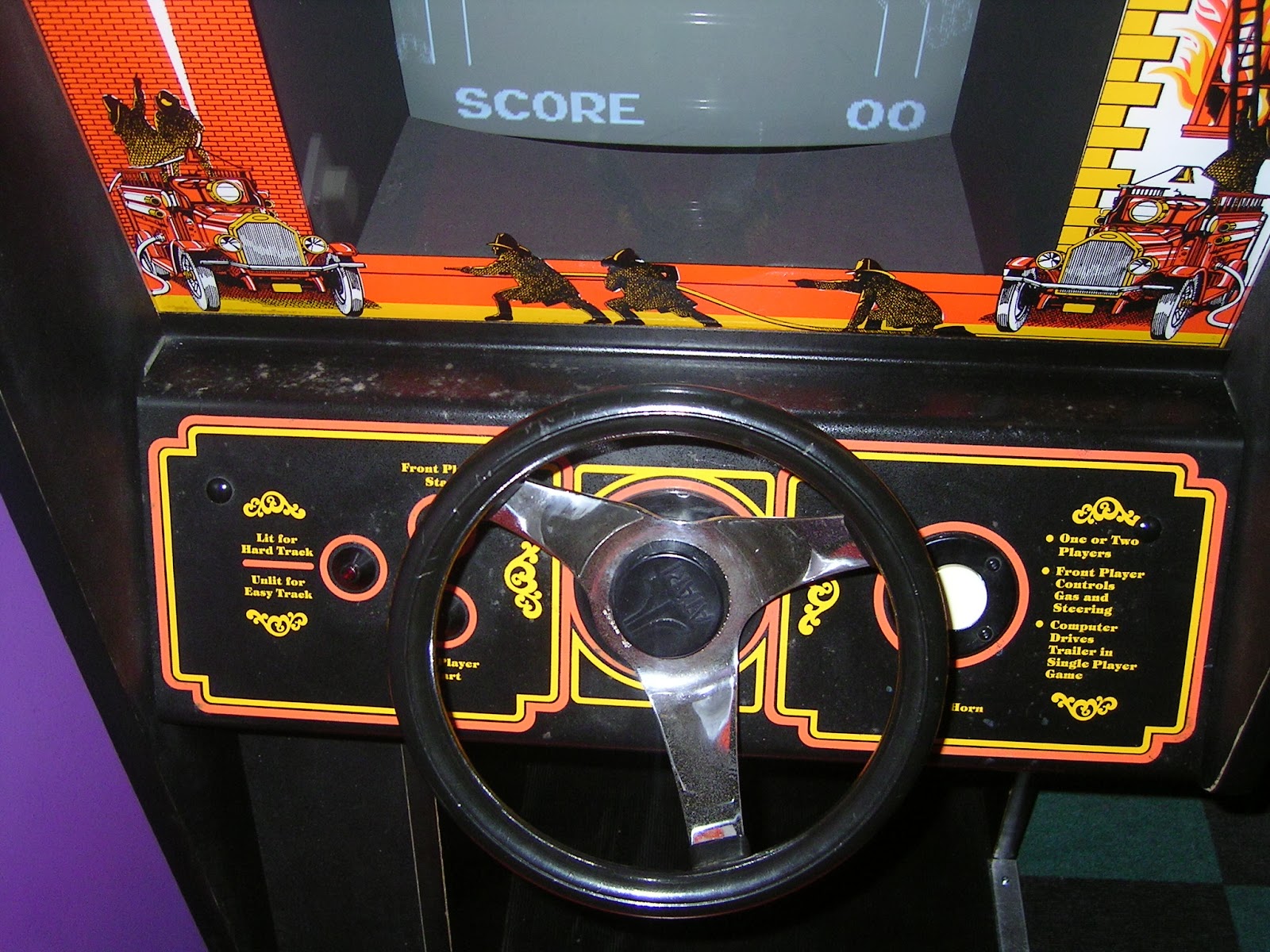 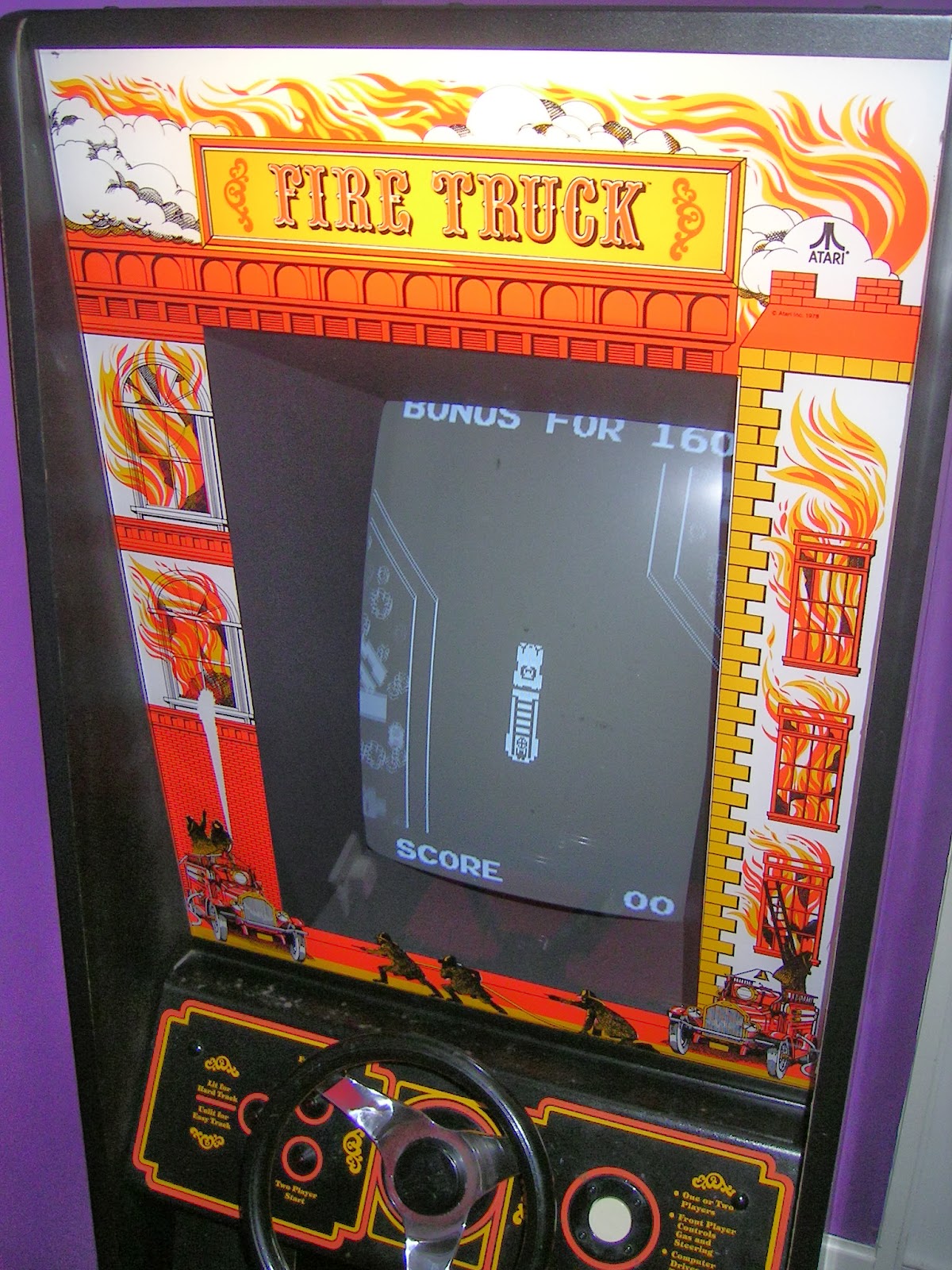 Thanks for reading, and a bigger thanks go to Phil for letting me have one of the three cabs he picked up all those years ago.

I've been slowly working on my Tempest cabaret in the background of my other projects. I bought the cab in non working condition, in a poor/fair condition. Both the Main and AUX boards were confirmed as being faulty so I decided to buy a working board from Mark at Retroclinic.

After replacing a couple of fuses in the power brick the game played. The picture from the monitor wasn't sized correctly and after a while you would what I thought was horizontal collapse, any way before I knew it, the game had died, it was still playing but there was nothing on screen.

The cab has been in this condition for nearly a year and being my current last non working cab it was time to do something about it.

First up I stripped the whole cab down and took all the parts out. I then, fitted some new teflon leg levellers to make it easy to move about, Its a shame this hadn't been done previously as the bottom of the cab had been roughed up by being moved around with broken levellers in the past.

Everything was then thoroughly cleaned. The ARII was rebuilt with new Electrolytic capacitors, voltage regulators and power transistor. The Power Brick stripped and rebuilt with a new multi fuse holder and 'Big Blue' capacitor.

The Control Panel had seen better days, it was peeled off in certain areas and rust had bubbled through the exposed sections of control panel. A member of the UK arcade forums runs regular artwork orders for arcade marquees and CPO's. I stepped in and had a CPO made up.

The old control panel had the buttons and spinner removed and then the remaining parts of the CPO were removed with a scraper. The panel was then sanded and spayed in black satin paint. After lots of careful measurements and bits of sticky tape the new CPO was applied. It all went well with no creases or bubbles.

The buttons were cleaned and refitted, the spinner assembly was also cleaned, new bushes and a new repro spinner were fitted. Overall it looks pretty good, not quite as vibrant in colour as the original, but for now it will do.

Next up... The monitor has a fault and so does the gameboard! You gotta love this hobby :)
Labels: Atari, Cabaret, Restore, Tempest

It's been a long time since the last update and tbh I've spent more time playing PP that finishing it off :) To recap from the last update back in August '13, I had just purchased a working boardset and had fired up the cab and played a few games.

Fast forward 24 hours and the game didn't run correctly I was greeted with a blue screen on the monitor with a 'RAM 22' error. Mark from Retroclinic kindly sent me a hand full of them and after replacing the faulty RAM the game still didn't work! eek, ok so what had happened, well my ARII had shat its load. The 2N3055 Transistor had failed and caused the ARII to output around 7 volts (from memory. It may have been 8 volts) well this had the effect of blowing a protection diode on the CPU board, so a week later Mark had sorted it at my expense, and I had replaced the offending 2n3055's on both ARII's. The game was working once again.

Not content with using the ARII's for fear of similar failures I decided to go down the route of installing a switcher PSU into the cab to run the gameboards' leaving the ARII's to run the audio amplification.

I jumpered the 5V line and the ground lines across test points throughout both boards, and removed the 5V edge connector feeds which came from the ARII. Fingers crossed the board have been playing fine for months now.

Next I needed to make a back door for the cab, I had already remade the bottom section of the cab when I was initially putting it together, but with having a new mdf door, it made sense to remake to bottom section so it all matched.


I still need to spray the door, that will get done in the first instance of some fine dry weather. After that it will be painting the coin doors (the frame is already done), remounting the mechs and then making a cardboard monitor surround. I'll get there soon!