Well after being tipped off on the Jamma+ forums that a Black and White TV made by Pye had gone unsold on Ebay, I made no hesitation in getting in touch with the seller and striking a deal. After a 100 mile round trip one evening this week I had an 'untested' monitor which seemed to suit FT's needs.

It's a 23" screen, had already been modified with a composite video and audio circuit (not that I need the audio) and it has no screen burn, things were looking good!

First thing first, there was no fuse in the plug, an easy fix but I did wonder why it wasn't fitted, next up was to remove the back cover and see what was inside.

Well nothing on the inside looked smoked or burnt, there was a bit of cable hackery going on for the extra circuit that been added, after 10 mins of checking the connectors were all seated, I plugged in a video feed from Fire Truck into the input on the back of the case, made sure it was switched to video input and powered up...

Well it was a good start, you cant tell from he image above but the image was rolling in horizontal and vertical directions. So at this point I powered off the monitor and discharged the tube, I needed to see what adjustments were going to be available to help me fix this issue. There were a few adjustable variable resistor's on the board but from the component side there were no markings as to what the were for, a bit more luck... on turning the board over to solder side there were some nice markings on the underside depicting what they should do.

So after tentatively making these adjustments which the chassis back in place, I got a good solid image which filled the screen nicely. The next job was to de-case the screen and remove all the unnecessary bits which I didn't want cluttering up the cab.

At this point I decide that I would power up the screen with the parts loose fitting and try and work out what parts I could remove to leave the chassis as lean as possible in terms of parts. This is an arcade machine and doesn't need to that tuning dials still attached.

I was now in a position where the tuning dials were gone and I had removed the brightness and contrast adjusters from the original circuit and traced their wiring so they could be re-soldered onto a mounting plate that needed to now make.
In the photo above the red wire is powering the video amplifier board, the left side mini coax is the video output which is wired directly onto the chassis circuit board, the other mini coax is he video input from a BNC connector which I mounted on the plate below the PCB with the brightness & contrast adjusters.

After a few evenings work this is how it turned out, I'm very happy with how minimal it became considering it was once a TV sitting in someone's front room no doubt.

Here's the parts left from the original TV

And finally...Mounted in the cab, and powered up :o)

Thanks must got to Tony (tb2000) for making me aware of this screen, the seller for not binning it when no one bid on the auction, This has been a great week for me and the FT cab, the Karma gods have finally paid me back after what feels like a long absence.

Next time will end the rebuild with a new back door, locks and monitor bezel. Until then thanks for all the comments, its been great to have such enthusiasm for the cab shown. I'm looking forward to completing this now getting lots of plays on it, initial testing has put a smile on my face for sure!
Labels: Atari, Black and white, Fire Truck, Restoration, TV conversion

Well after the game board came back from repair, I couldn't hold off and wait for everything else to be completed so decided I needed to power it up and see what would happen...

The video is a genuine 1st power up once everything was plugged back together:


It turned out pretty successfully, with only a couple of LED's on the Control Panel buttons having failed, I have since swapped these out with some working ones, the image from the monitor is poor in the video but I can assure you that's a temporary measure and will be rectified in the future before I declare the cab to be complete.

The rubber matting was completed when I made my last post, but I forgot to add a photo.

Since the above video was made I have put a 19" temporary video monitor in the cab and have been busy play testing it.  :)


I have also fitted a 'non invasive' credit button which is activated by using the coin reject button on one side of the coin mech. The left side is for 'free' credits and the right side still take 25 Cent coins. I've also fitted a bulb holder to replace the one that had been cut off so the 25 cent sign is now illuminated.


After having some fun playing I decided to have a look at the monitor mounting framework that was part of the original monitor. It turns out that some woodwork was missing from the cab, I made a new part and fixed it to the cab, which is highlighted in the image below. 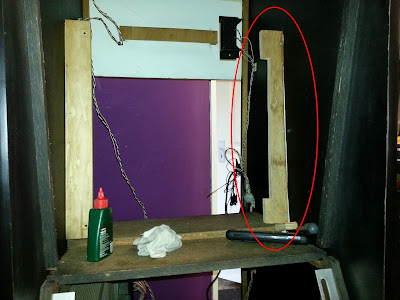 The monitor (that I don't currently have!) will now sit in a wooden framework that attaches to the two pieces in the image above.

Sorry for the slow progress, I'd have liked this resto to have been finished a while back but I've wasted a few days trying to get some colour monitors to work unsuccessfully with the game, I really need an original black and white CRT if anyone has one laying around spare?

Next time... The cab will be completed. Remaining items to completion are as follows:
Once the above are complete I'll make another, better produced video and post up some quality photos of the finished cab.