So we all know on UkVac PhilMurr is the king of High Score Save modding with Hardware and software mods allowing all sorts of trickery to take place with our vintage games.

Now I can't remember when we discussed the idea of a High Score save mod for Video Pinball but I do remember telling Phil it would be a good addition to the game. The high score is displayed during attract mode, there's no table for initials; just a single entry showing the best players score.

So after discussing with Phil we initially thought we could get things done by using his 6502 ROM & RAM board along with some coding magic. After various attempts with the code and changing the way the 6502 board could be used we (and really I mean Phil!) got the board running the game without the need to use any other game ROMs, they were all running happily from the 6502 mod board.

To make the high score persistent through a power down another hardware mod was going to be needed. The two rams where the score is stored are 2114's at location C3 & F3 on the Game PCB. Phil already had a RAM board that takes two 2114 RAMs and uses a 6116 in its place combined with a coin cell battery and a Non volatile Controller IC to save scores on the game Phoenix, this was going to be our weapon of choice to solve the problem. due to the IC locations on the Video Pinball PCB it wasn't going to plug directly in, I needed to have four wires from the data lines on the RAM PCB linking into one of the RAM locations on the game PCB.

I used some SIL header pins so the mod is fully removable, I soldered the link wires into the SIL headers and these plug into the sockets for the RAM.

There's a few photos below showing how the mod fits the Game PCB.

I'm sure Phil can comment on the intricacies of the mod if anyone has any questions.

I'm really pleased with this mod and owe Phil a few beer tokens for his efforts in getting this up and running. 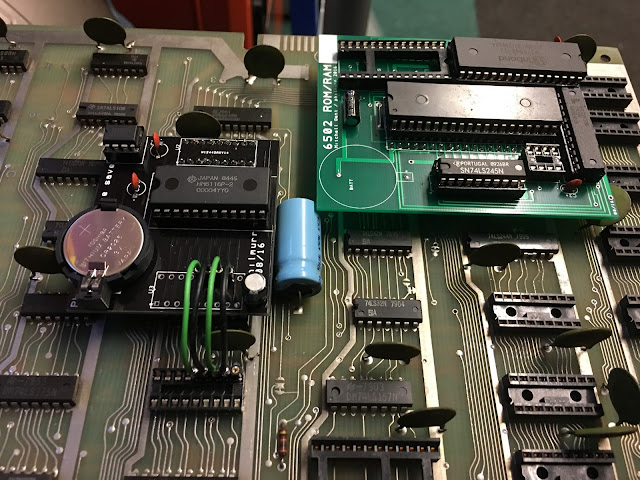 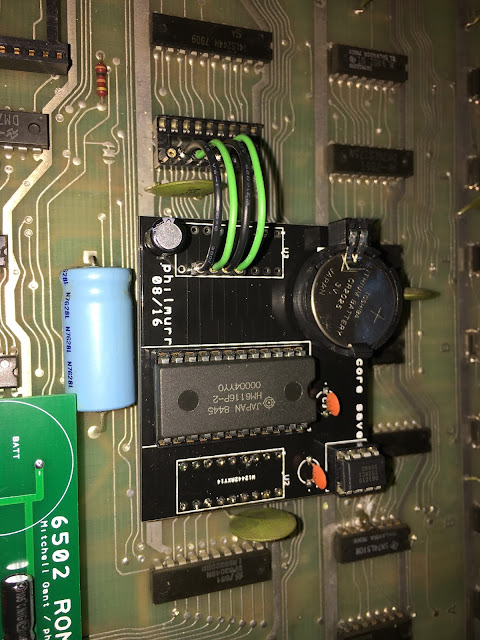 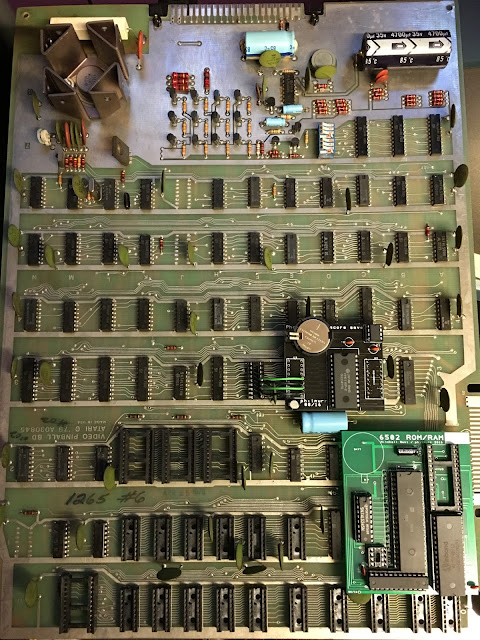 So cleaning the are around the IC that had failed showed no real track damage, the board is burnt and doesn't look pretty but nothing is shorting together or in need of repair. 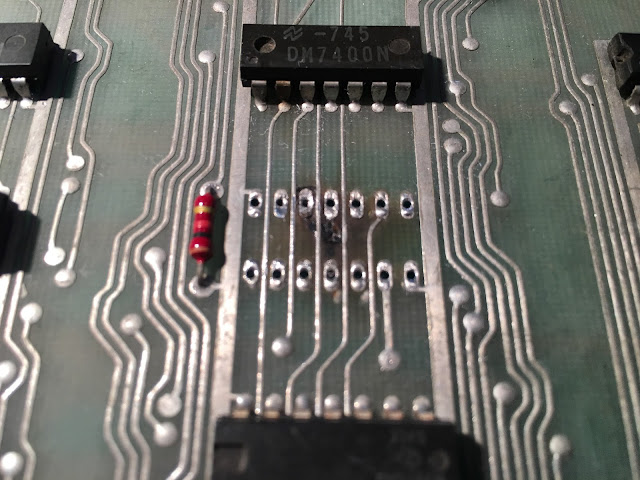 I fitted a new socket and replaced the 7432. Upon powering the game up the video tearing I was previously seeing has gone there's still some sort of image issue on the left side, and the bouncing ball has appeared. Progress is being made. :)

The ball was just running from the bottom of the display to the top and repeating over and over. No collision detection or rebounding with the bricks or side walls. 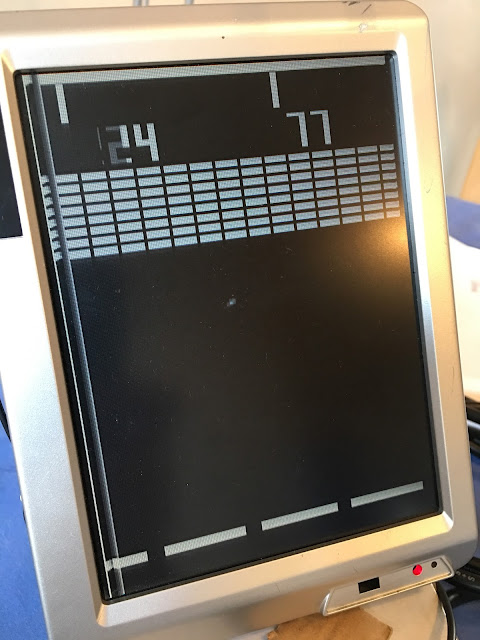 Now then, the paddle wasn't looking correct, It would change size when you turn the spinner but didn't really move correctly. In the paddle circuit I found a 7408 that had a bad output on pin 11. This was swapped out with a replacement and as shown below the paddle now works correctly, even though it is too small. The ball will now rebound off the paddle in game mode or in attract mode, it will also rebound off the top wall above the score line so it's not detecting the bricks. 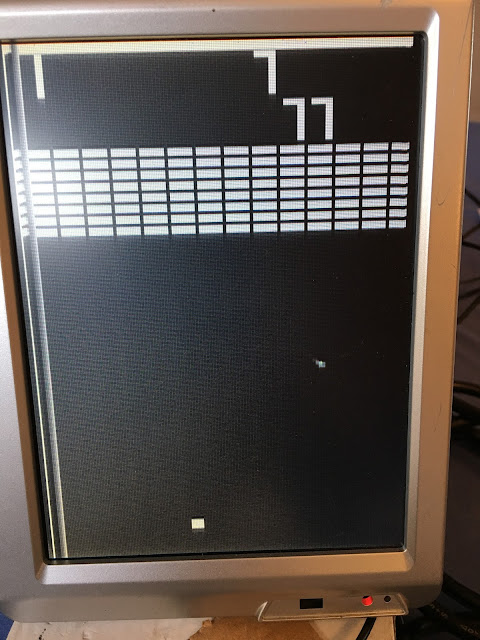 Clearly there are issues with the game coming in & out of attract mode, the scoring isn't working correctly and I'm sure the amount of live isn't being counted correctly and I haven't even looked at the sound circuits yet.

There's still plenty more to fix by the looks of it. I'll keep you all updated.

Following on from my last session looking at the Breakout PCB, I spent a short while making the wiring connection more complete on the edge connector. I added Coin 1, 1 Player start, Serve and the paddle control. I also added a link to the edge connector for Coin 2; on these early games the coin switches use a common connection along with a normally open and a normally closed contact. If the normally closed contact connection of Coin2 isn't connected to the games common ground connection the game will always think the in Coin2 switch is being activated and stuck on usually stopping you from coining the coining up properly or playing the game correctly. 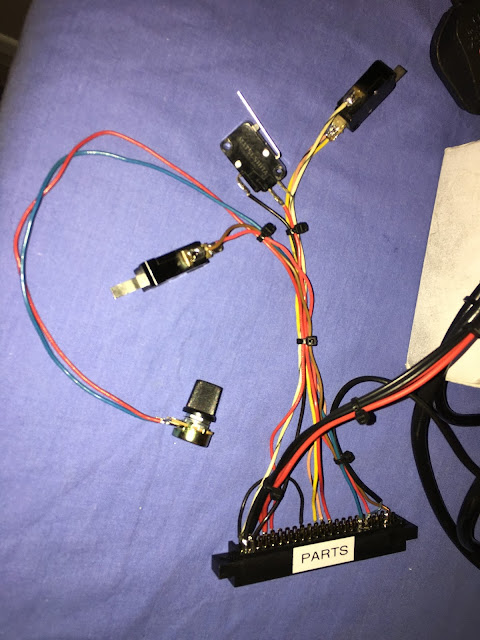 I decided to begin this session by checking all the the H & V clock signals that are divided down from the master clock circuit on the PCB. They all appear correct and present when using a logic probe to check for signals at the IC's where they are created (K1,L1,N1,N1 9316 IC's).

Next up I look at one of the Rams at L3 just checking for signals, no real idea of thinking about a fix just checking components that could lead to finding a fault; well its missing one of the Chip Enable signals on pin 3, not a high signal, not a low, nothing. Taking a look at the board (even though I already made a quick visual check) it's clear there's a broken trace, most likely from the original multiple wire mod that had been installed at some point. 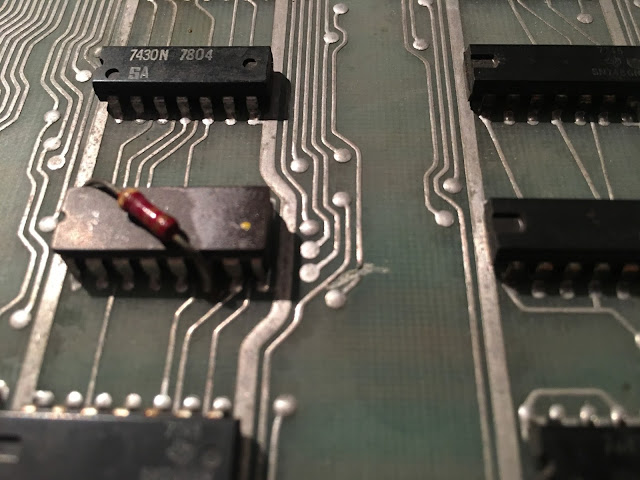 I checked where this was wired and sure enough one side of the broken trace was connected to pin 3 of the IC that had the missing signal.

I made a repair using an old cut off capacitor leg. shown below. 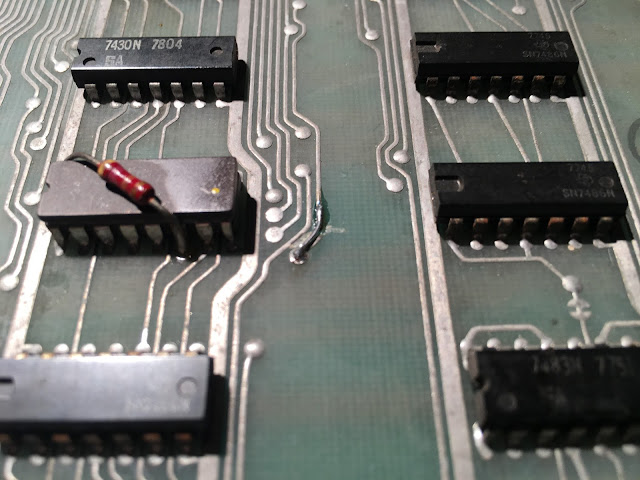 Powering up the game I'm now presented with some Playfield bricks :) 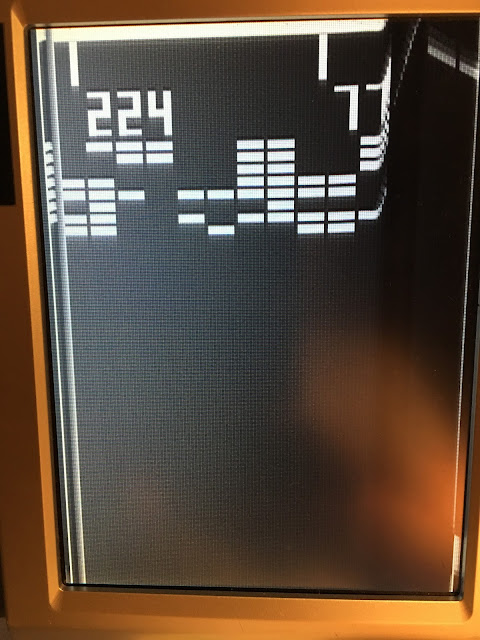 So in my mind now other than the bad video syncing/tearing issue, the game when in attract mode is missing a bouncing ball along with a paddle 'wall' which should completely cover the bottom part of the screen in attract mode. There is a 74157 IC which controls these component parts of the video graphics, before they are joined to a resistor network to make the final video signal.
The  *Pad signal is missing, again using a bright light to investigate another trace is broken (to the left of the middle IC in the photo below) 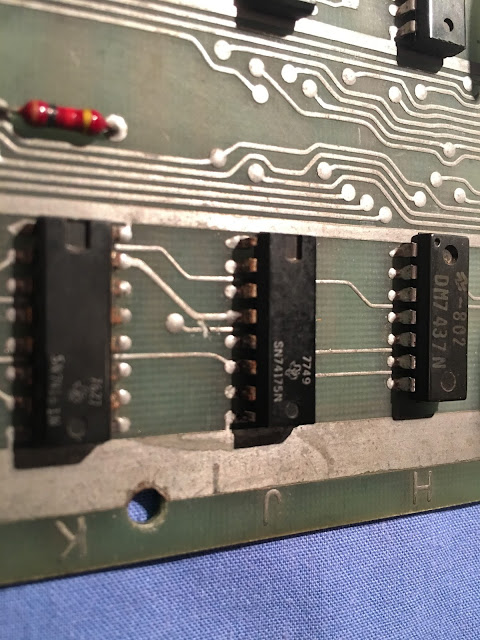 Once this is repaired we appear to have a paddle at the bottom of the screen, not completely covering the horizontal plane but good enough for now until I have fixed the bad syncing if the video. 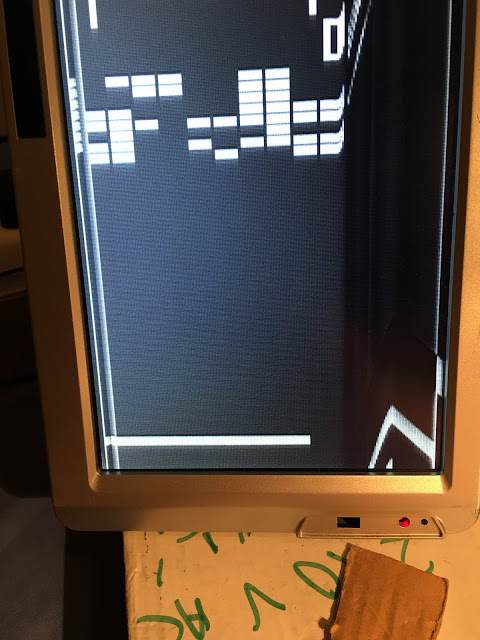 I thought I'd try and find why the ball was not visible, it should be bouncing around the screen in attract mode. There is a signal called 'BALL' this was active, it passed through a circuit linked to the serve button on the control panel and the signal turns into 'BALLL DISPLAY' this signal is stuck low.

Tracing though this part of the circuit I find the 'Serve' signal (derived from the control panel button) is constantly stuck low even when the switch isn't connected, the signal should be 'high' when the serve switch is 'open'.

More signal tracing goes on which leads to a 7432 at location D2 looking at the image below you can see the area around pin 12 look a bit brown and burnt. It turns out pins12 a logic input is directly shorted to pin 11 an input. Also the track in between pins 11 & 12 was shorted to these two pins! That trace is a signal connected to the coin switch circuit. Considering pin 12 is connected to the serve switch I can only guess that at some point someone has put voltage down this connection instead of the serve switch wiring 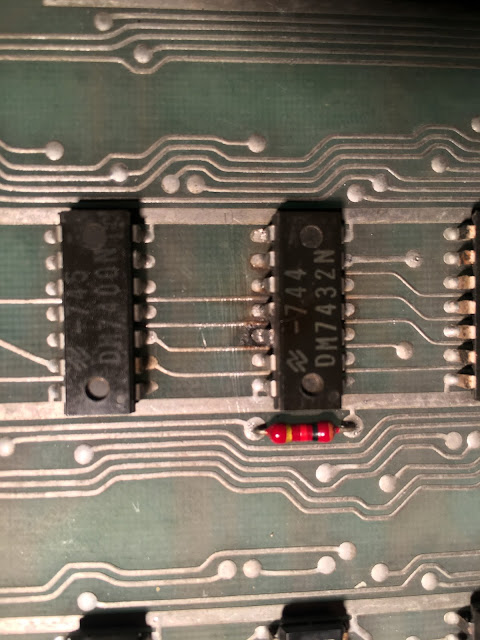 I decide to chop this pin out to see what's going on with the burnt looks around this IC. After snipping the leg off, I'm greeted with the following mess! This IC has failed big time with parts of it melting to the track below the IC. 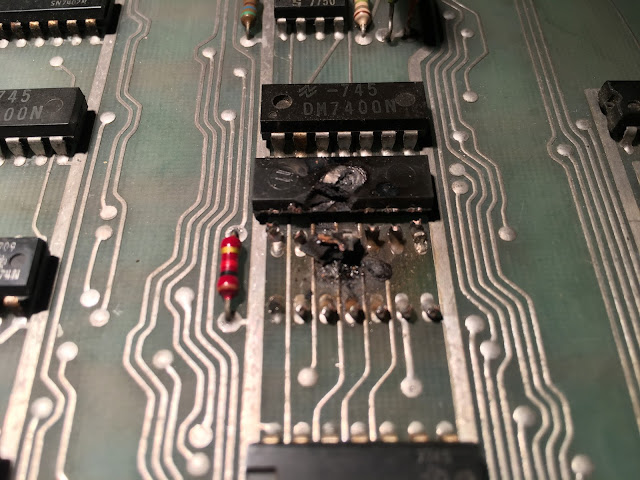 This area needs to be cleaned up and checked over before replacing the IC and hopefully seeing the Ball bouncing around the screen.