Atari Super Breakout PCB. Back from the dead...

Well a few weeks back I picked up a new cab, a 1978 European (French Built) Atari Super Breakout. Bought in an unknown condition, it turned out the only faults were with the game board (No surprise there !) and the LED on the Serve button being blown. The photo below shows the cab with my test generator plugged in in need of a good clean. 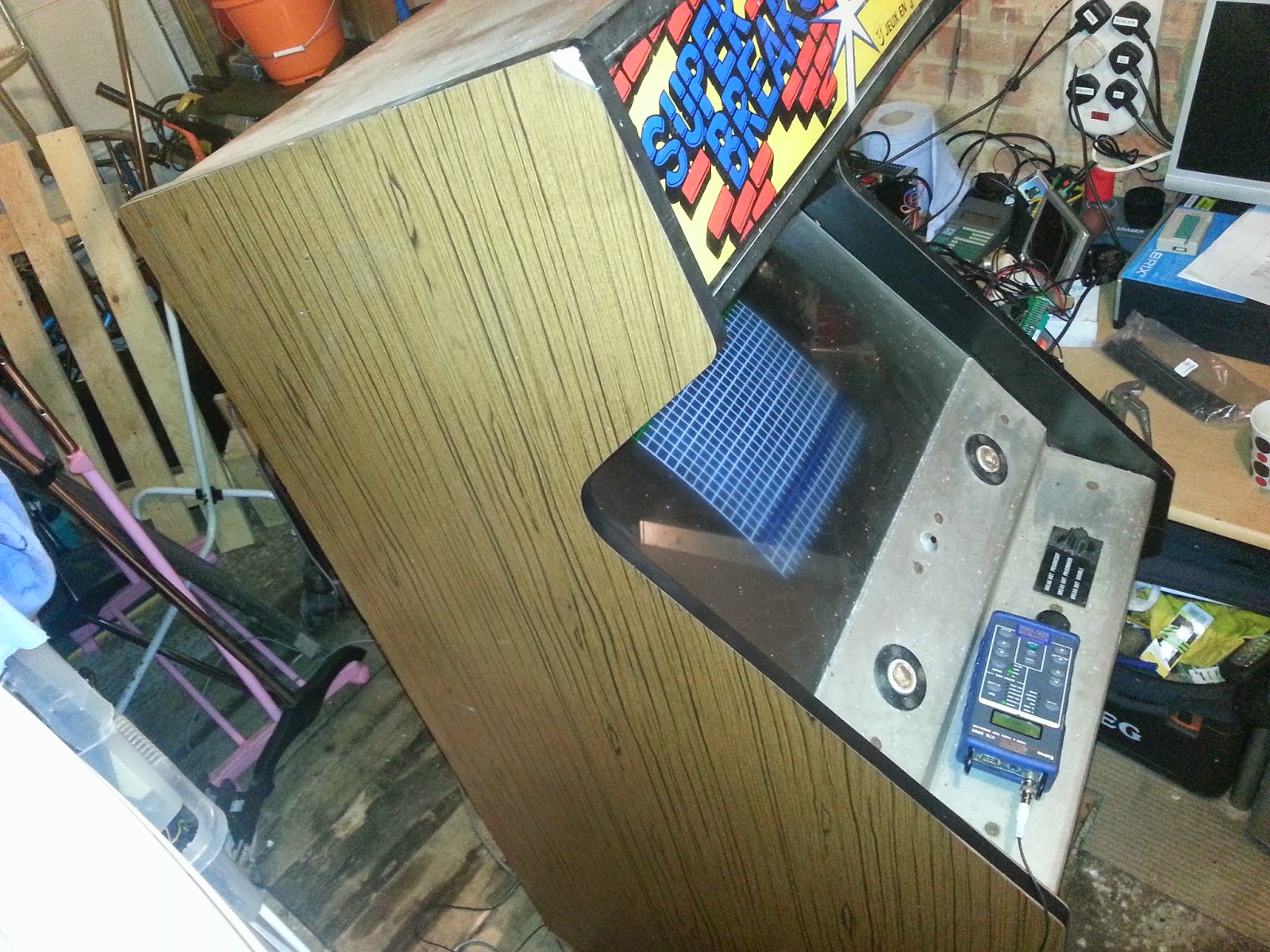 After confirming all the cab voltages were correct & present, I plugged the game board in to be greeted with a black screen and some very faint horizontal lines running across the screen. To get this running in a test rig I re-used my FireTruck/SuperBug adapter as the pin outs for these games are similar, well the Power and Ground signals to make the logic work are on the same pins. I added a few new links on the adaptor to supply my monitor with Composite along with a few switches for Coin-up, Serve and Test.

Now on my work bench, (AKA the Dining room table) the board gave the same symptoms as in my cab.

First I checked using my logic probe to see what the CPU (6502) was up to. Pin 40 of the CPU is the reset pin, this was constantly pulsing high and low when it should be constantly high after an initial low at power on, from this we know that the CPU is not running the game code from the ROMS.

Next to check was the clock circuit, Pin 37 of the CPU is the clock input, this pin should have a nice clock signal on it but there was only a low signal and no pulse. I then went right back to the start of clock circuit and checked the 12Mhz clock and the circuit where the frequency of this is divided down to the Horizontal & Vertical timings that keep the board running in time.

All the H&V clock signal checked out OK which the took me back to looking closer to the CPU clock input. There are three IC's directly involved in making the clock input for the CPU run. As it turned out all three were faulty. A74LS20 @ A8 had a dead output, this fed into a 74LS174 which had a bad output on pin 12, this connected to a 74LS32 which should provide the CPU clock signal, this output was stuck high with no data pulsing. Once all three were replaced and confirmed as faulty, the clock input was looking good, clock outputs 1&2 also came to life now, address bus and data bus lines were active but something was telling me the pulsing I was seeing was not right compared to what I have been getting used to recently while working on board repairs. The game was still resetting.

Following the path of the Address bus lines there was an IC @ F2 labelled as a 3901 on the Atari schematics, the outputs of this device are the PROM select lines. All 6 used and the for unused output were dead, Not high, not low  but completely dead. Researching what this IC was and where I could source a spare I found very little info other that a post in a pinball newsgroup from 2007. the 3901 was a '1 of 10' decoder and seemed to now be unavailable anywhere, to me this looked like a similar decoder, the 74LS42 which is used in other Atari games I've worked on, the only difference seemed to be the pin out, so I had to make an adapter to convert the 74LS42 pin out to fit how the 3901 was wired on the Super Breakout PCB. I decided to know up a IC socket to socket adapter with wiring to convert the pin out. The finished item is below, it's not pretty and at the time I wasn't quite sure if it would work, but it had to be better than an IC with no working outputs.

Upon power up we now had some garbage on screen, the CPU was still resetting but I was making progress :) All the other important signals which should make the game run were present but again the way the pulsing looked on my probe made sure something else was still pretty sick on the board.

I next decided to socket and replace the eight 2102 RAMs. I have no way to test these so for now putting new replacements in would hopefully help me get the board working, I'd then be able to test them once the board was working. After swapping these there was no difference to the above screen. I decided to try swapping the CPU with a known worker, my Missile Command PCB now comes to the rescue... After swapping the 6502 over the game comes to life! Watching Attract mode shows the blocks disappearing with no sign the balls.

The game wouldn't start or go into test mode and as mentioned there were no balls in attract mode. The Coin, Start and Test inputs are pass through a 74LS153  @ M8, the output pins from this IC were both stuck high, removing and testing it confirmed it was faulty. After swapping the 153 the game would start and would enter test mode. Test mode gave no errors so things were looking good other than the missing balls.

The three 'balls' video signals are derived from a bank of six 74LS163's, piggy backing two of the six with a known good device made two balls return. These two were removed and replaced, the third ball couldn't be found by piggy backing on another '163 but I used some guesswork and removed the IC I thought was the problem, It did turn out to be faulty and once replaced the game looked like it was fully working. The three '163's (Locations R6, P6 & N6) were tested and confirmed as faulty as shown below.


Time to put the board back in the cab an check the controls and sounds. All sound and controls worked great.


The game tested out and plays fine in all three modes. Another classic rises from the dead. :)

Total parts replaced for this repair.