New kids in the arcades....Animal Kaiser

So I just got back from a family in North Wales, I visited a few arcades and found them full of redemption machines, pushers and it has to be said a good stash of new sit down drivers and an Afterburner Climax cab.

I never spotted a 'classic' machine on my travels, but I did stumble on a machine that was new to me; Animal Kaiser. At first from a distance I thought it was a new Sega Dino/Mushi king type cab upon close inspection it is a Bandai Namco cab. The game in a basic form is player one vs computer or player one vs. player two. You are an animal and you battle against your opponent. You only have two buttons, one chooses your attack and the other chooses the attack strength. Simple enough but, there is added excitement that after each game you get a game card which can be used in you next game. There are three types of card: 1) A red 'Animal' card, If you have one of these you can play with that animal in your next game. 2) a Green 'Strong' card that increases the power of you attacks and finally, 3) a Blue 'Miracle' card which acts as you special move.

When you start a game, you scan one of each card if you have them and that combines your strength and health and special attack. The games consists of three rounds (If you last that long) fighting a different animal each time with the big boss in round three. The game is like a skill stop selection, your first button press chooses your attack type which is dependent on your cards, and next button is the power of the attack, the game then takes over and shows you being attacked or you attacking the other player depending on who had the best attack. The idea is to knock their health down and wipe them out. Whether you win or loose, you get a new game card at the end of the game. As the name goes all the cards are based on different animals and in true collecting style some seem to be plentiful and others can be Gold/Silver & Bronze 'Rare' cards and one card is labelled as 'Ultra Rare' which is the character with the most strength.

I was amazed in the evening that these machines were packed with kids wanting to play all night long, at one pound per play these machines would have been making the operators a very good return. Not just that but there was a real buzz around the game and who had which card, a classic moment for me was when a small girl came up with her dad, he got some game cards out of his wallet and as she scanned them there were real gasps and cheers from everyone as she scanned the Ultra Rare 'Seigfried' card, this will be an awesome moment in my arcade memories as it was great to have my kids really getting a buzzing arcade experience. Lots of very jealous kids standing by in anticipation watching her game! We all had smiles watching, but she didn't make it though all three rounds even with one of the best card.

Between myself and my two kids we spent about £50 on the game over seven night, we got a few of the rare cards and the kids now want me to get a certain machine for the home arcade. lol.

From researching since I've been back these machines have been around a fair while with these cabs having 2007/8 copyrights over them. This game was labelled revision four which is new in the UK, but there seem to be at least another four versions that have been released worldwide to date. See below for a few photos and a video of Son number one playing. Each game lasts around five minutes which in today's arcade, combined with the fact you get a card is pretty good value entertainment in my opinion. 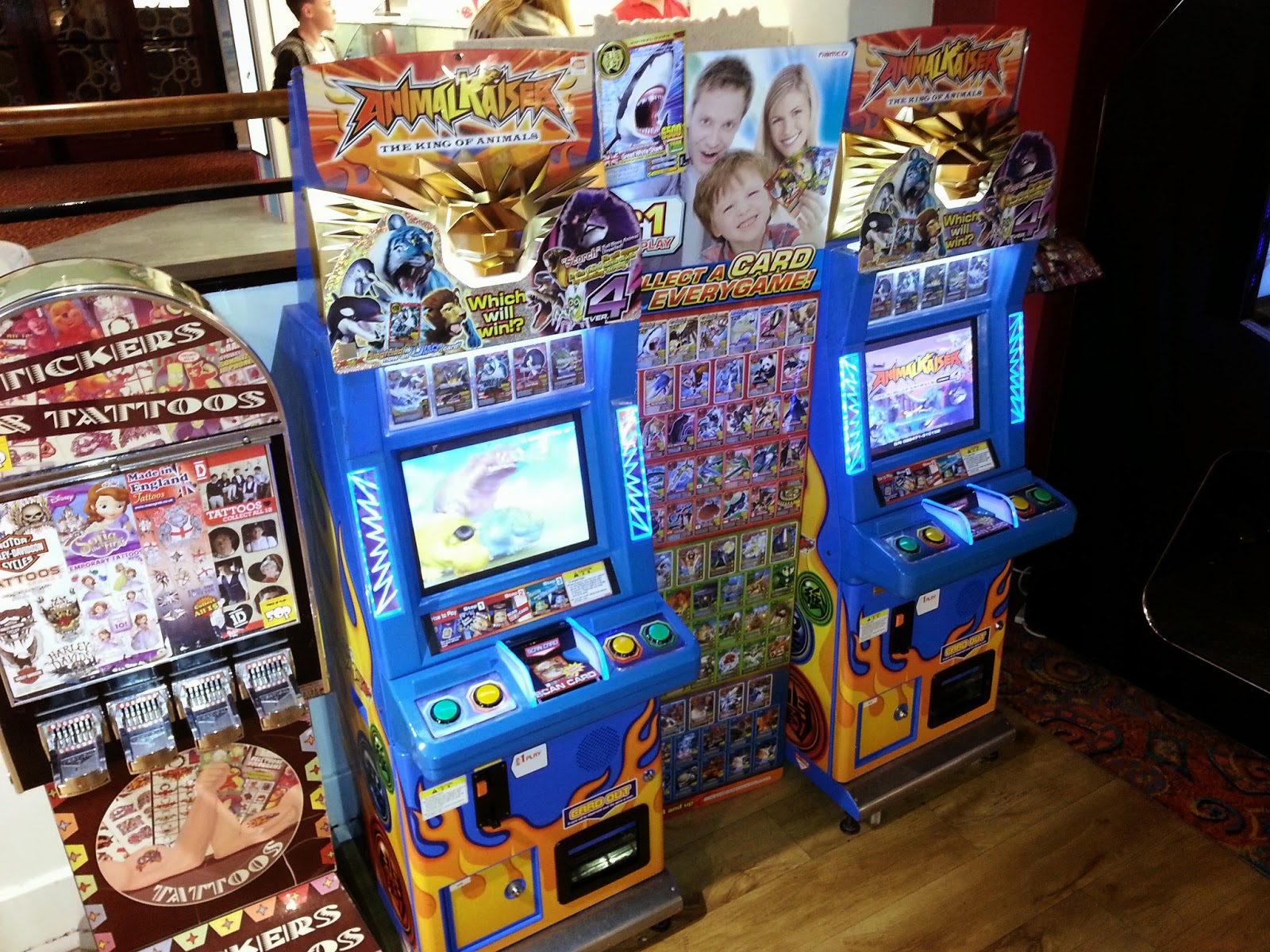 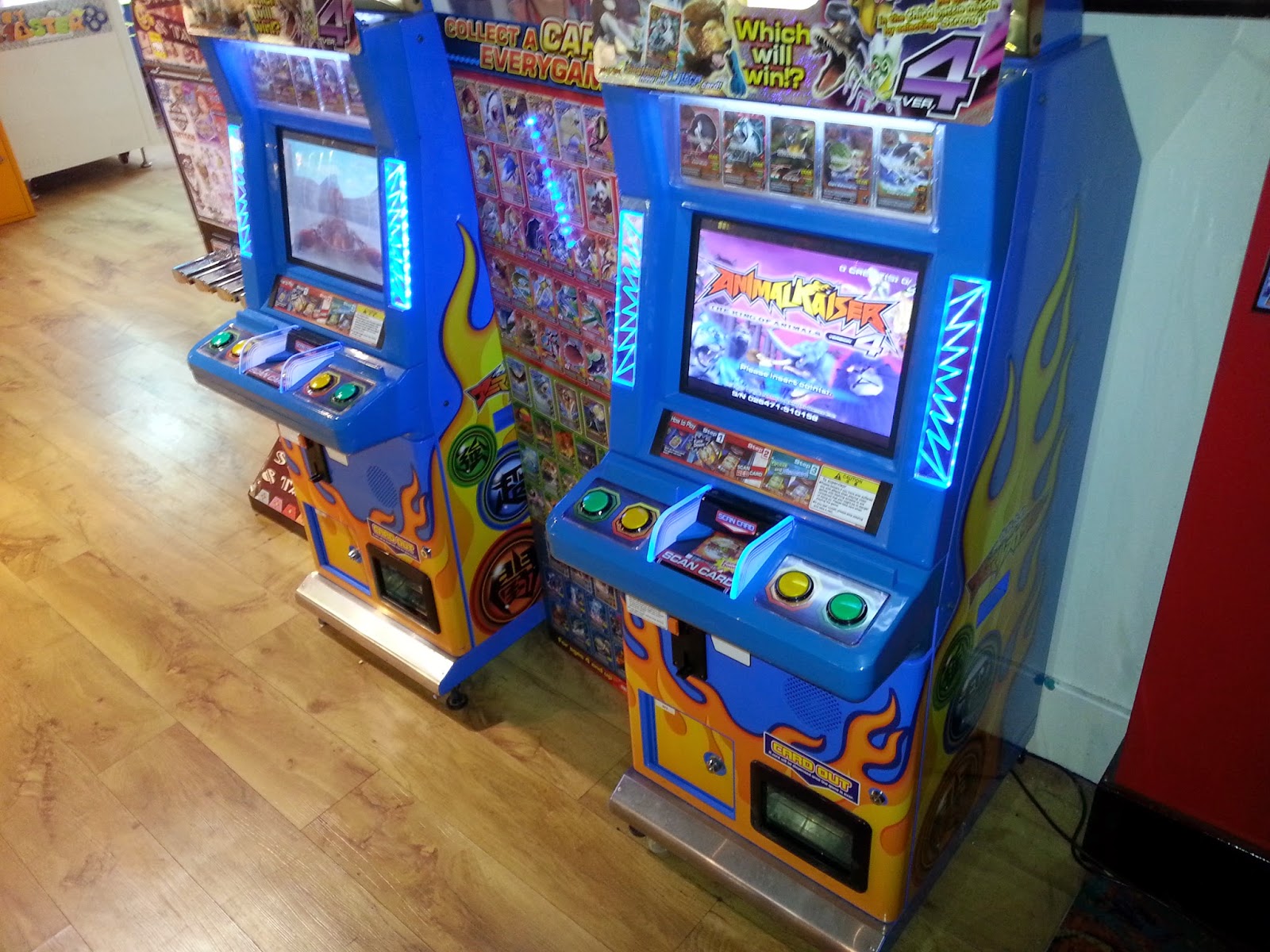 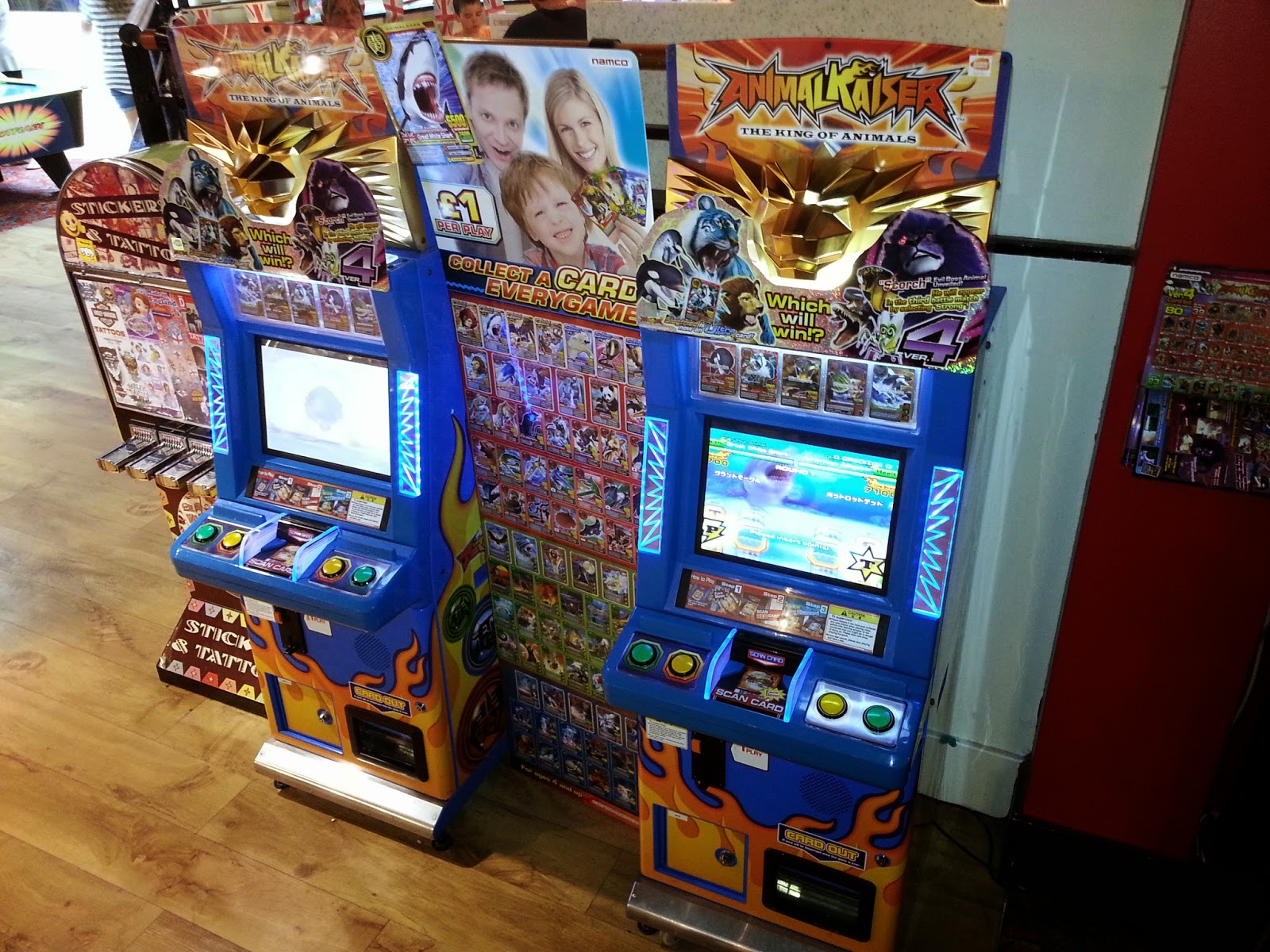 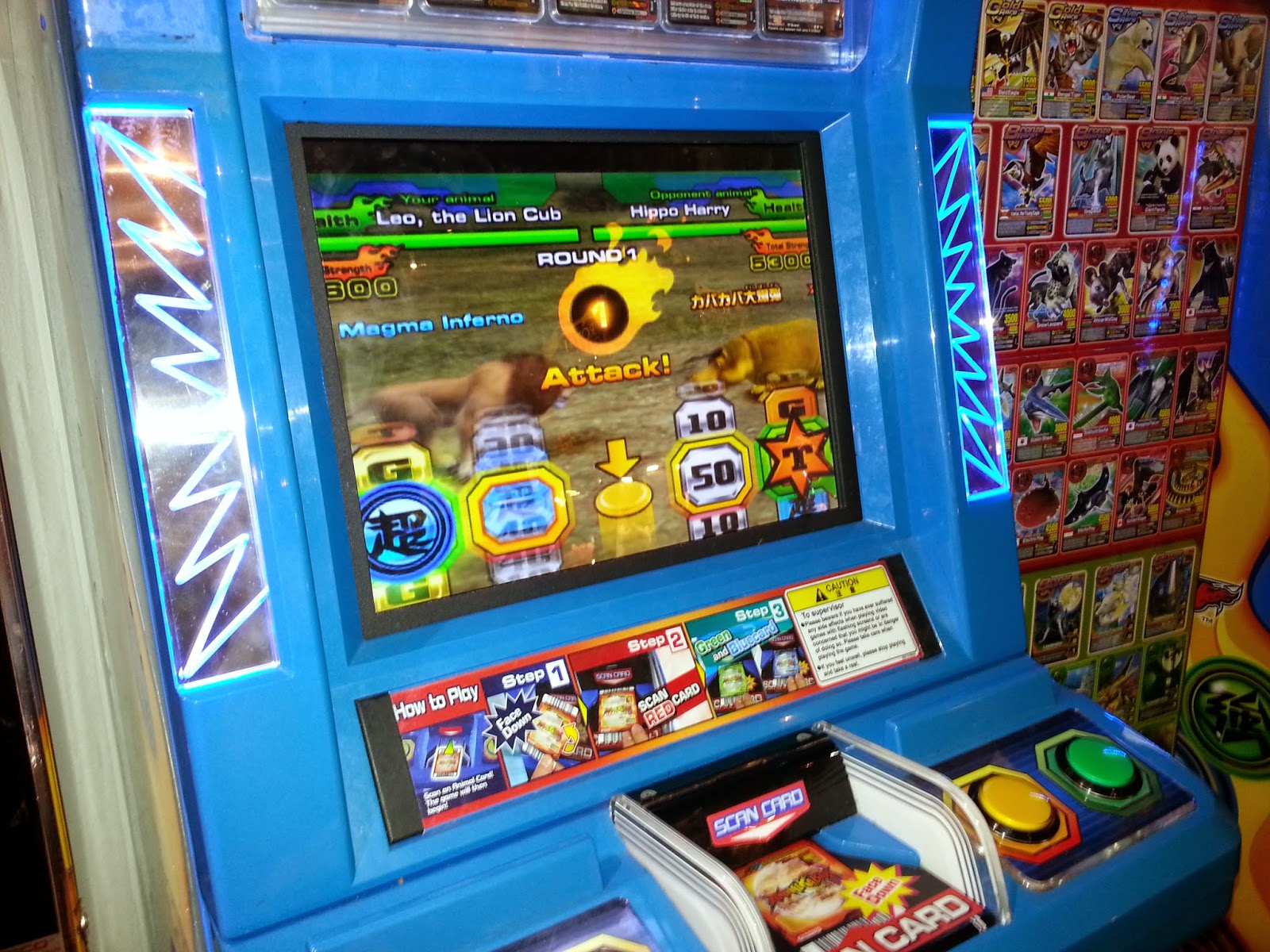 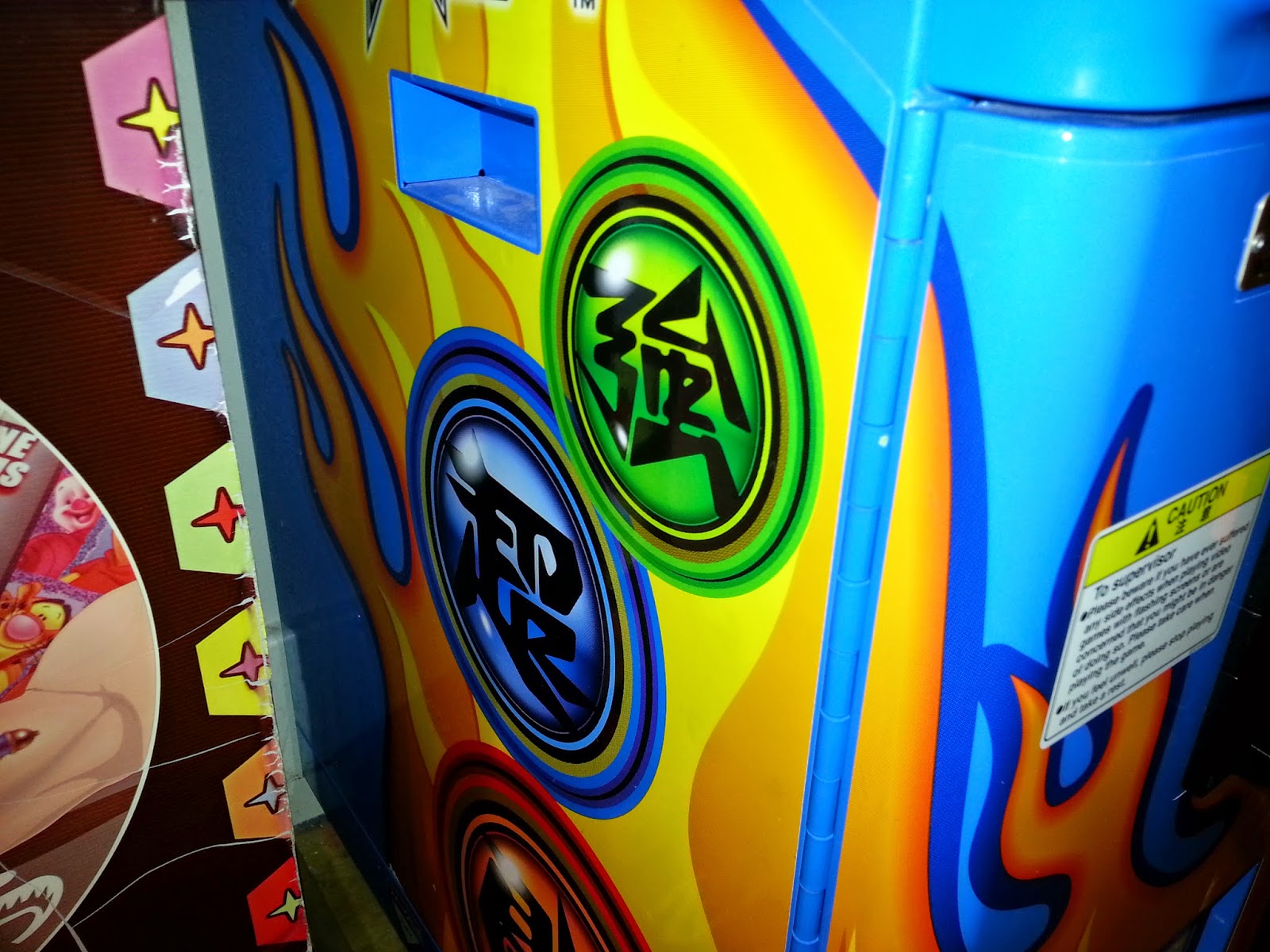 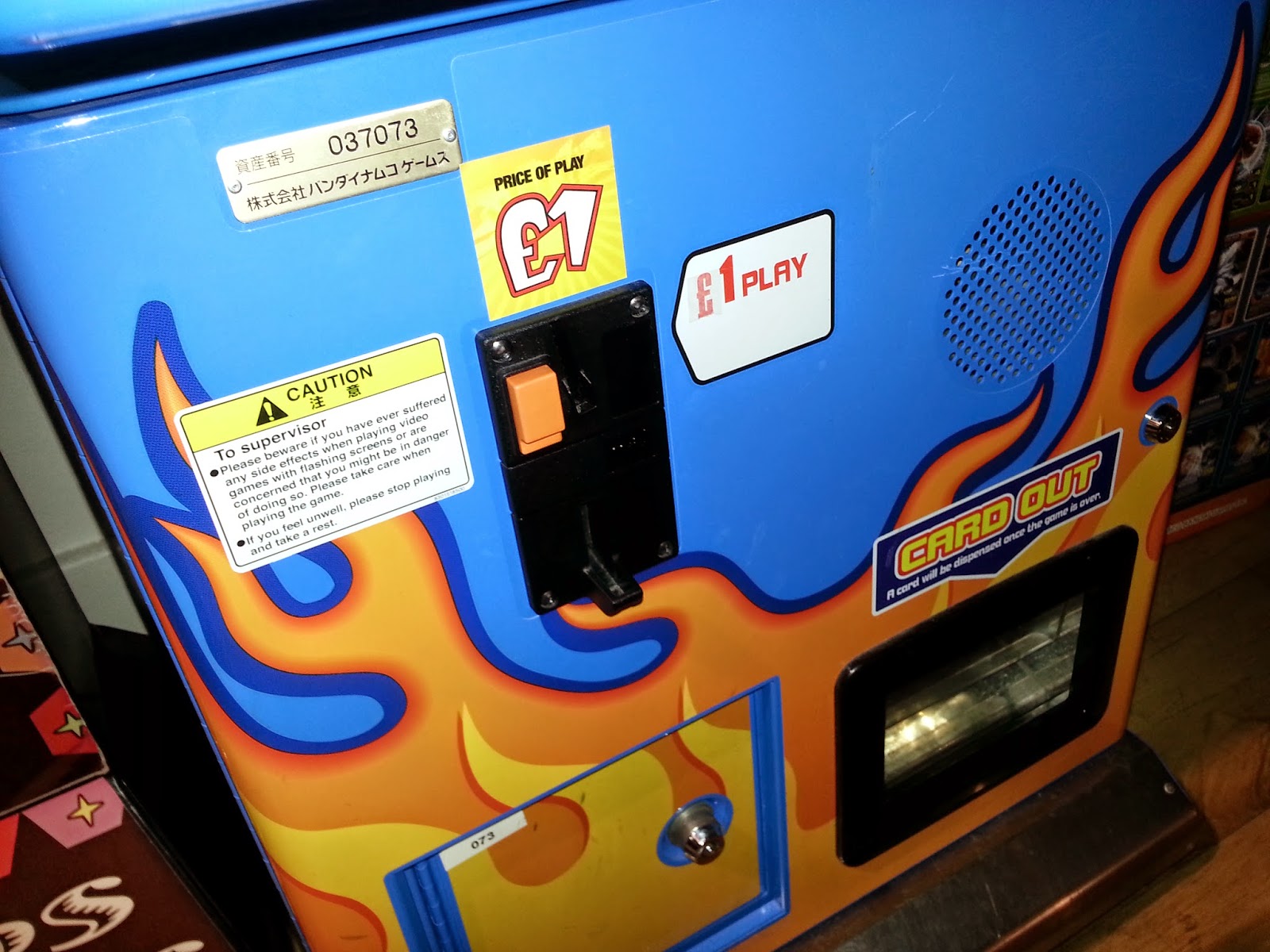 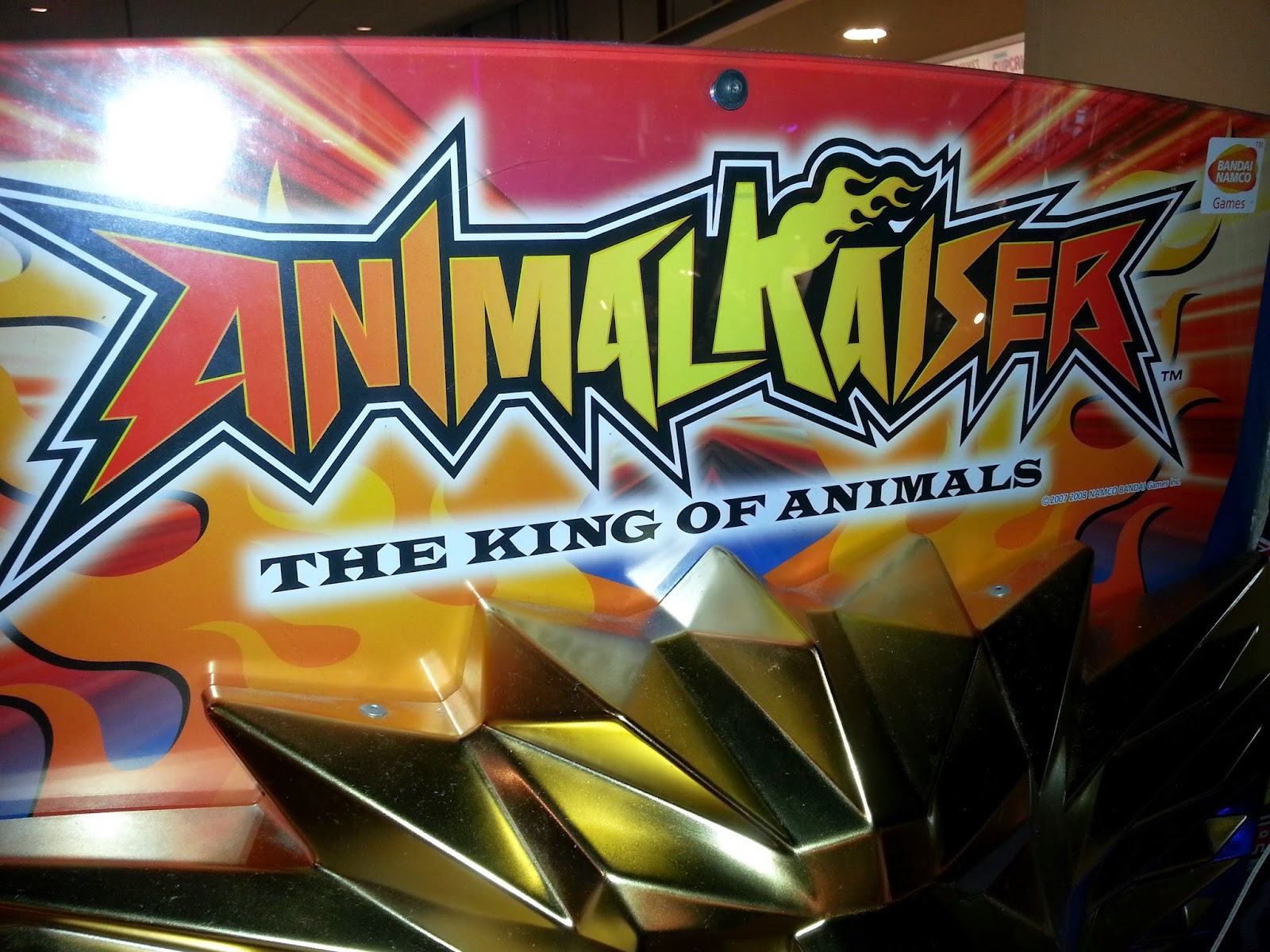 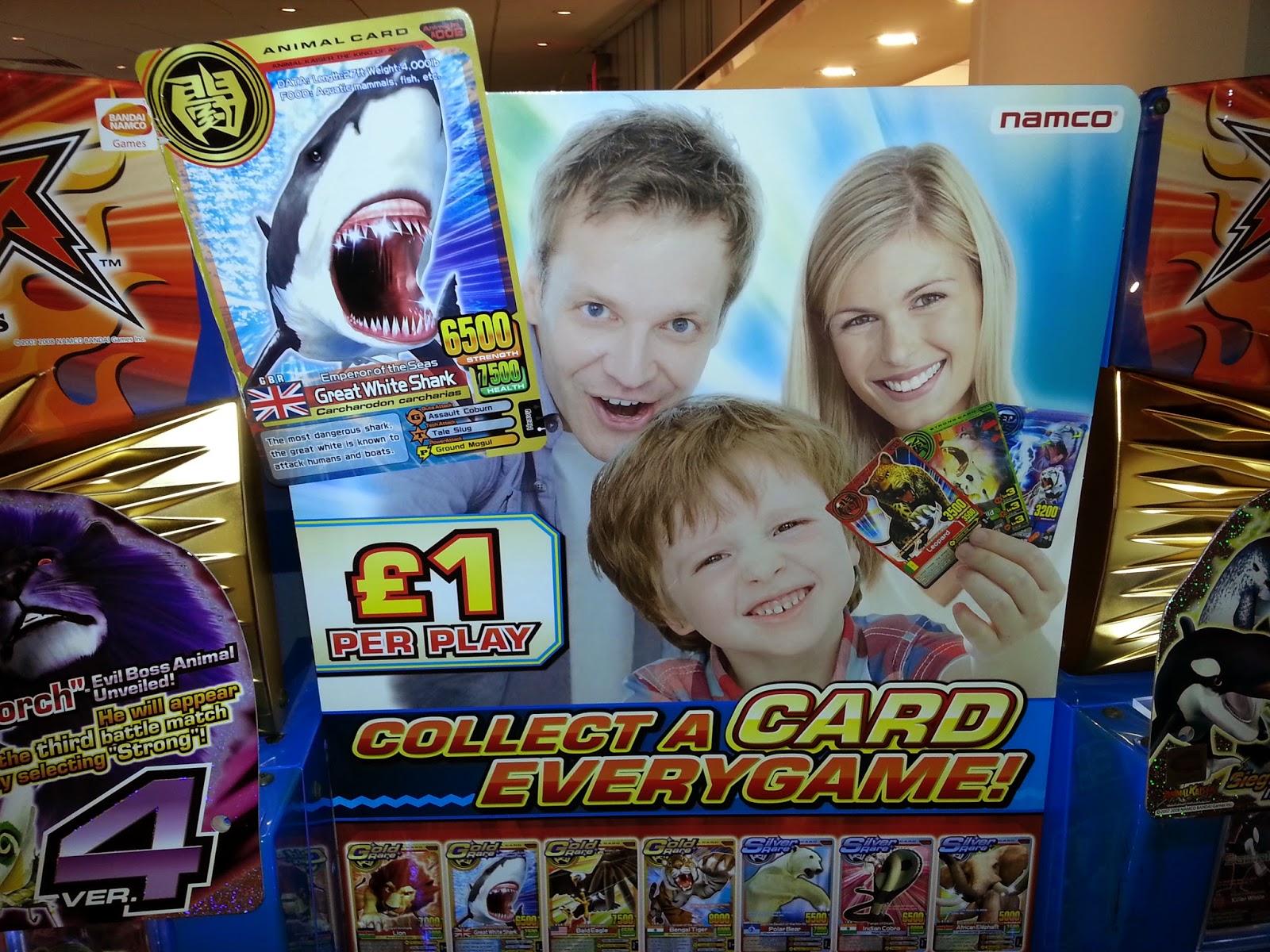 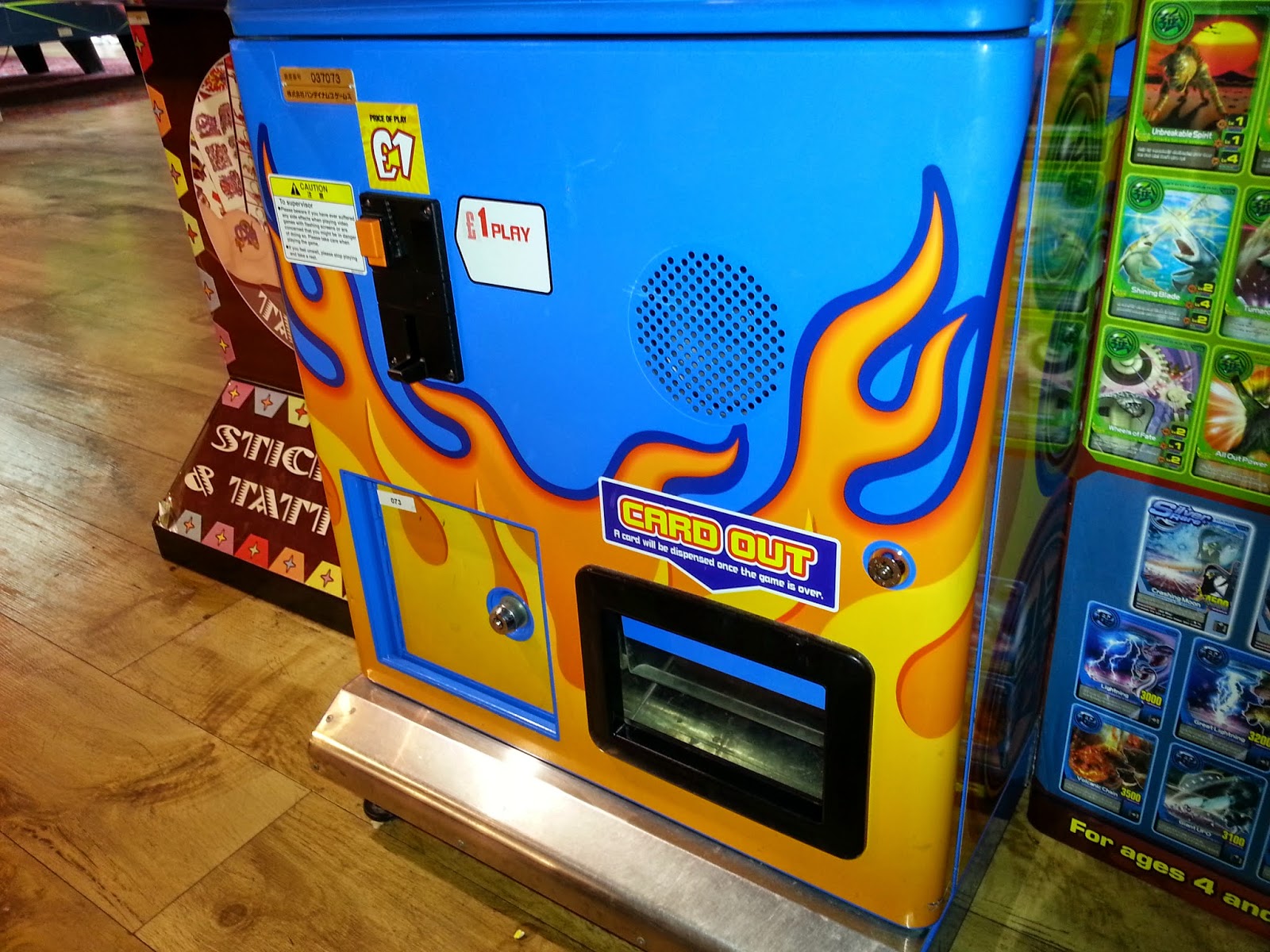 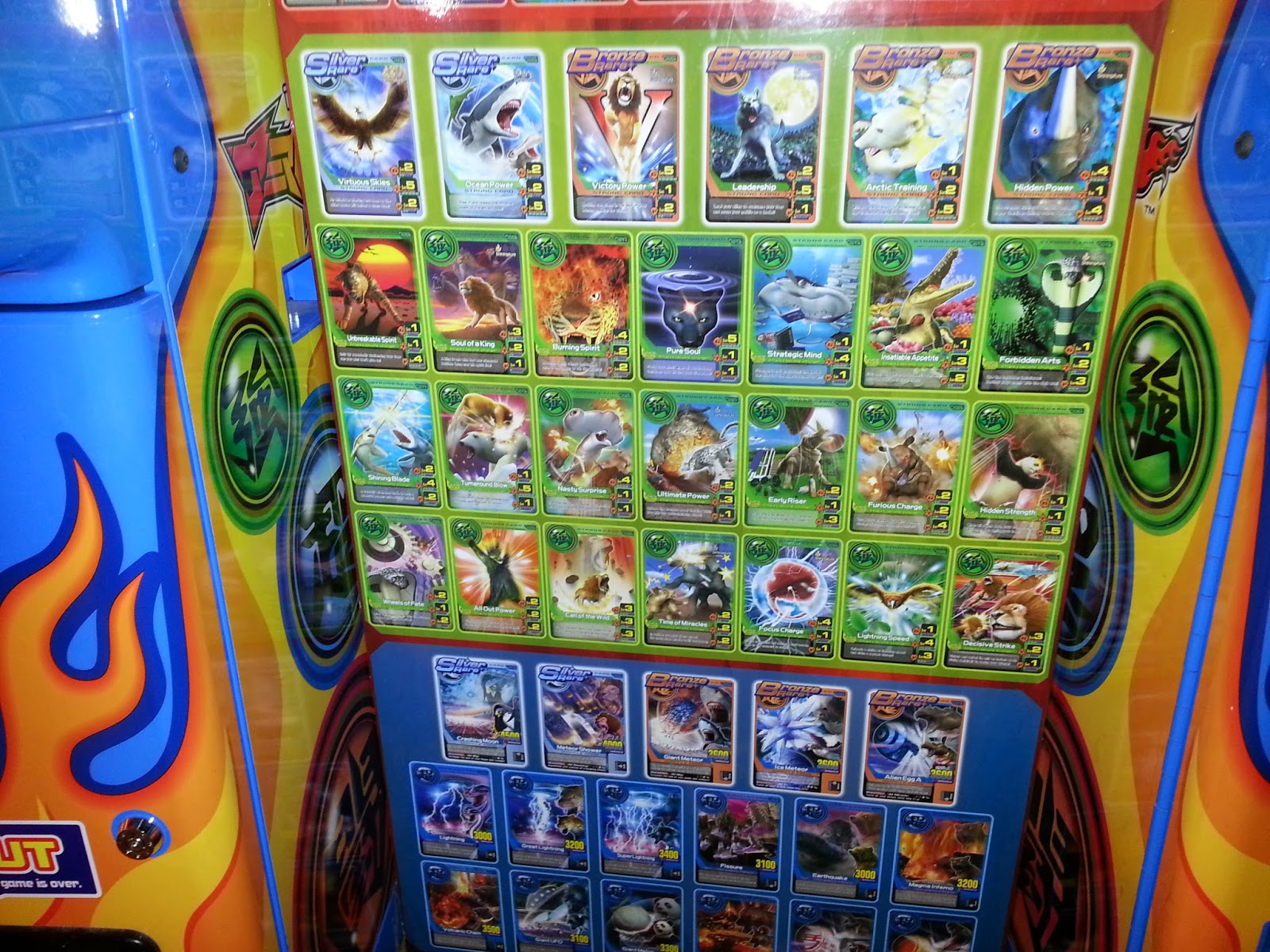 After watching the games being played for a few days one finally ran out of game cards which needed an Op to open the cab up and put in some new cards, I took a few blurry photos as you can see below. There were 600 cards in the box and they were labelled as A,B,C & D. I couldn't tell if they went into different compartments and wonder if certain packs contained the Animal/Strong/Miracle cards etc. 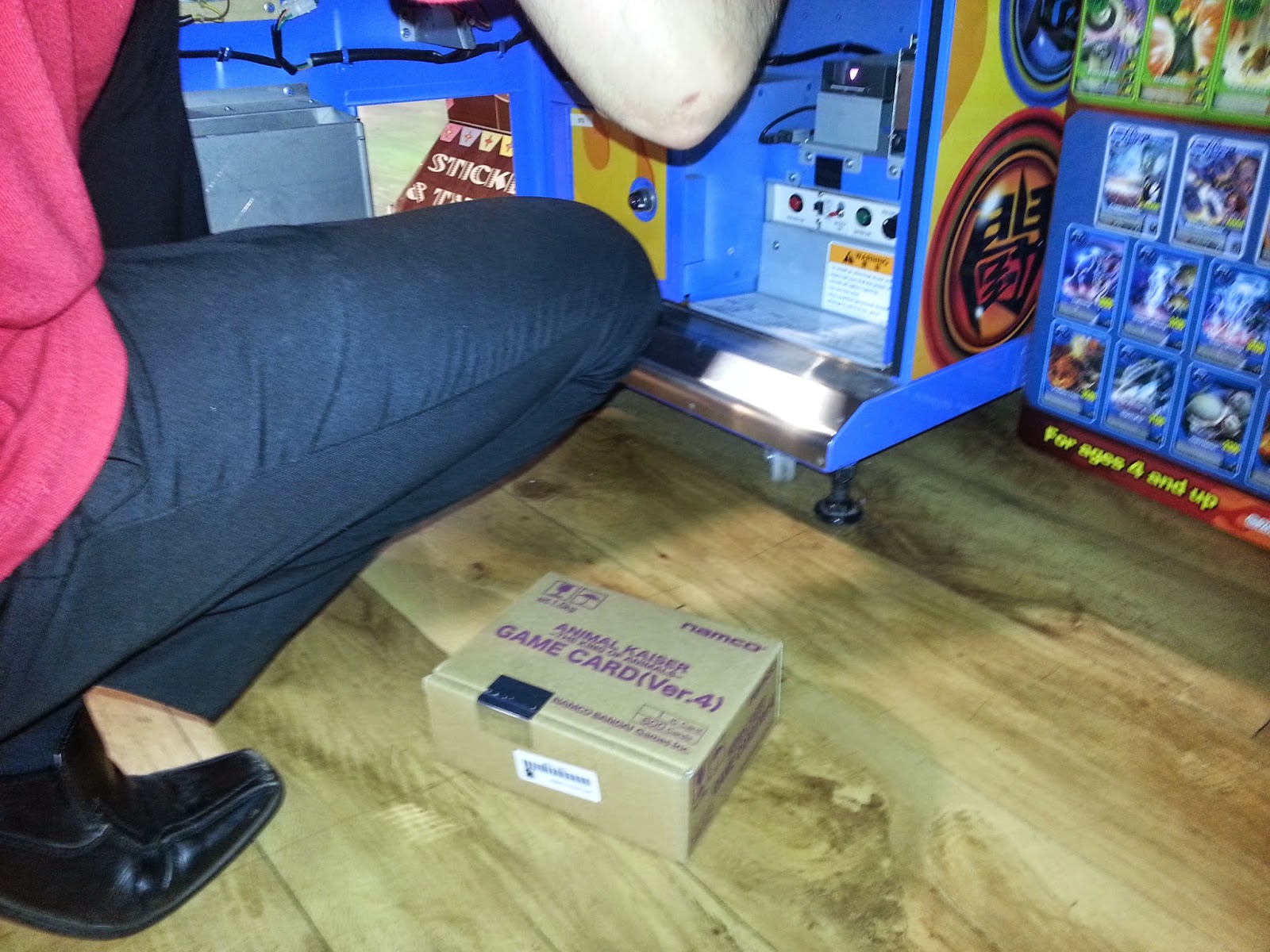 Game cards in the box above, and the (blurry) service menu in the photo below. 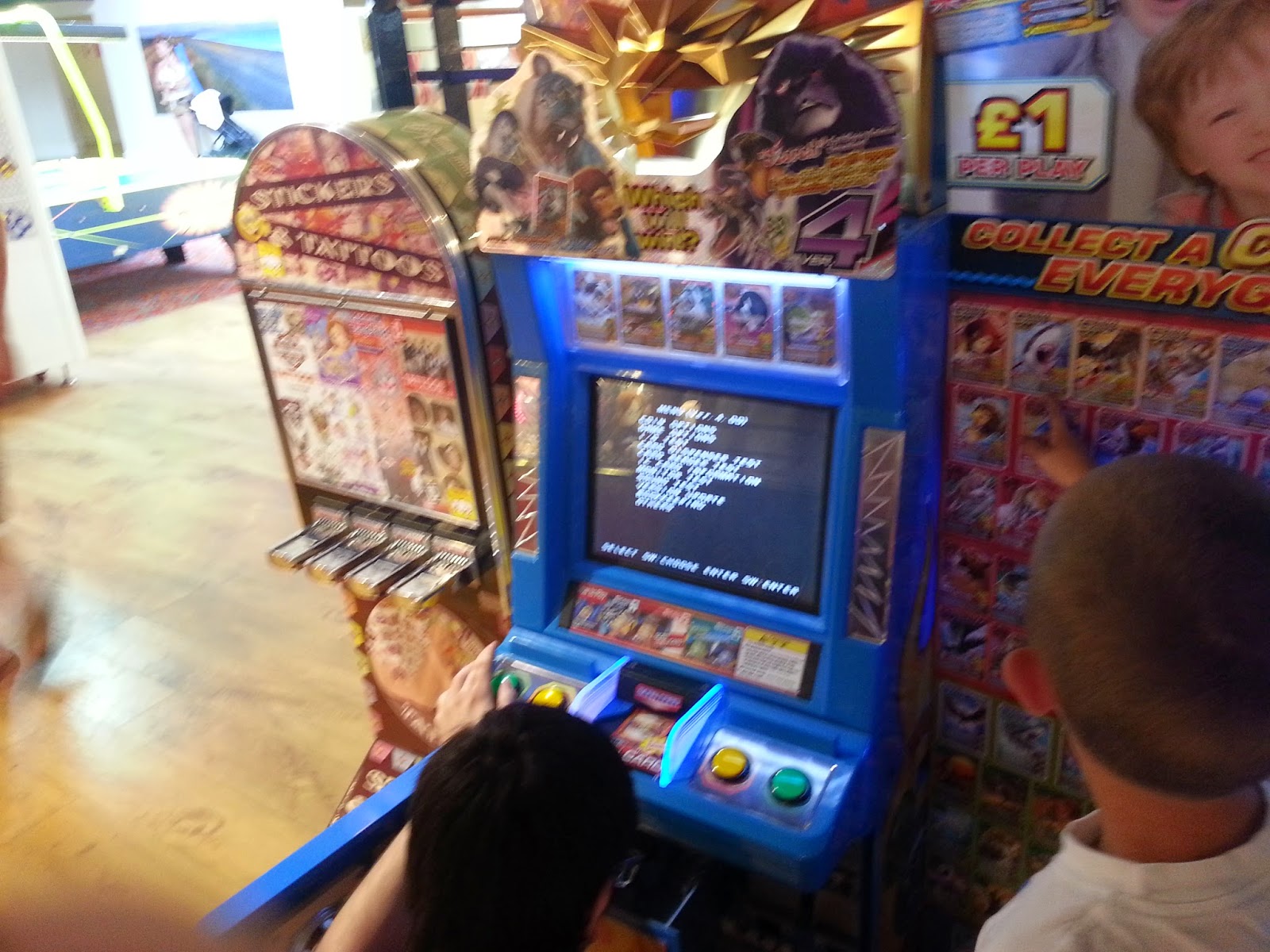 Our card collection, including a Gold Rare and some Bronze Rare's. 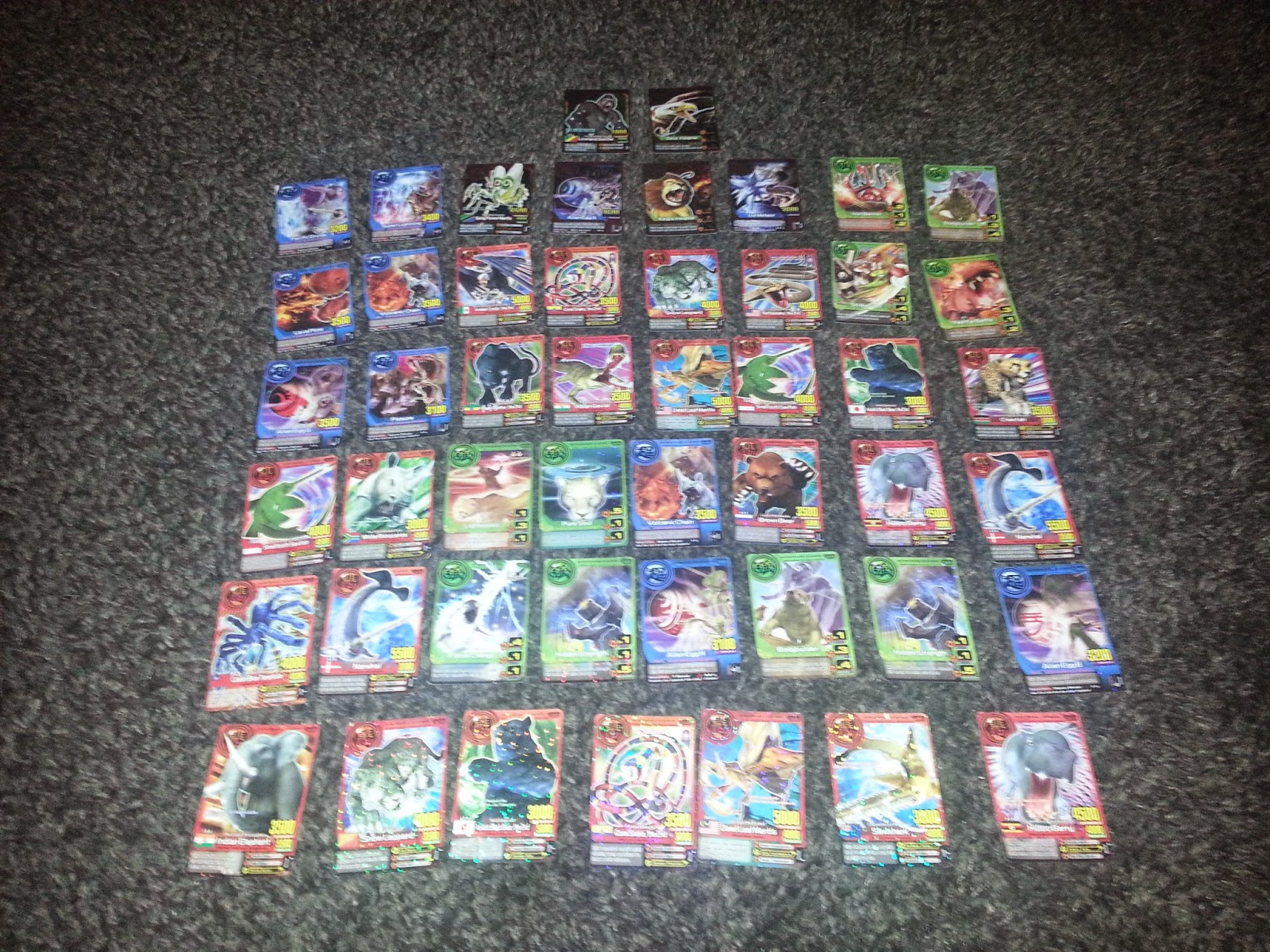 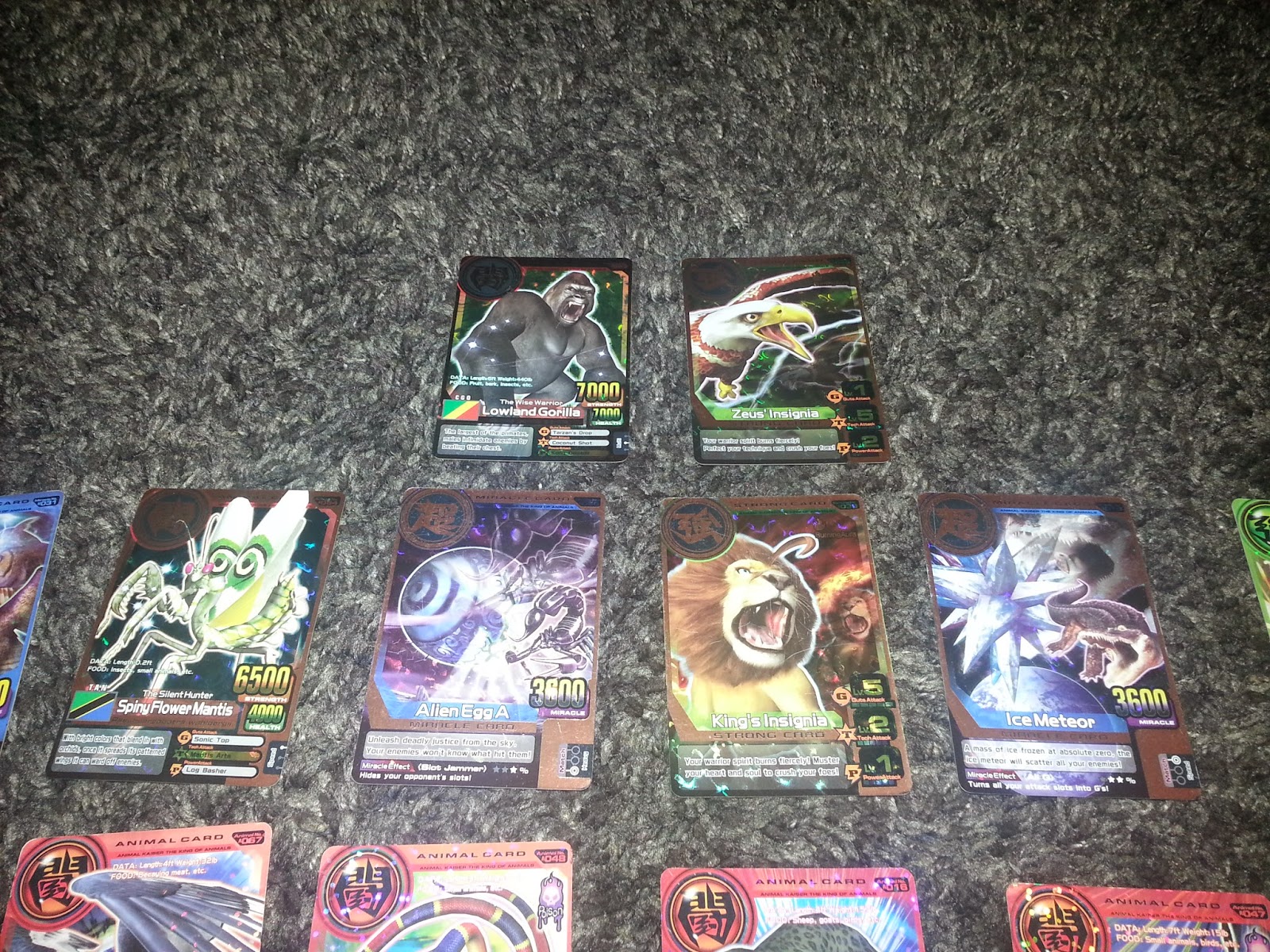 If you want to find out where you can have you wallet emptied there is a map on the Facebook page that shows current game locations in the UK.
Animal Kaiser UK website
Animal KAiser UK Facebook Page