I have a couple more items that I've completed in this update. The rear seat now has new T-Moulding, and I've refurbished the coin door metal work along with the bracket that links the front and rear unit together. First up are the brackets that link the two halves of the cab together.

I have also give the coin box a covering in the direct to rust primer, and I think I'm going to leave that in the matt black finish as it looks pretty good.

Because the laminate sides has lost their stick to the main wood sides of the cab, I decided I would put the cabinet on its side, remove the T-Moulding, glue the sides back on and then refit the new T-Moulding.

There's no really much to show, but I used some spray contact adhesive on the wood of the cab and the laminate sides then after a few minutes the parts were pressed together. Once the glue had cured I then moved onto the T-Moulding. Starting with the underside of the cab to avoid any joins showing it was a case of using a mallet to guide the T-Mould into the existing slot, I did cut some of the groove out on the tight corners to make sure it pushed home and was a nice tight fit. The same process was repeated for the other side.

I've also stripped and resprayed the coin door, this looks really nice now and I'm happy with the results. 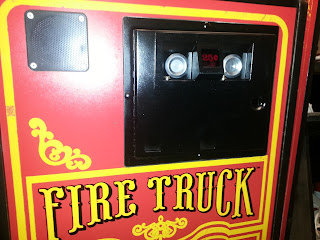 Below are a few photos of how the seat looks now. At this point there's not really a lot more that I'm going to do to the seat other than fitting a lock to the coin door and a bulb holder for coin door light. The next update will be when I make a start on the main cab. 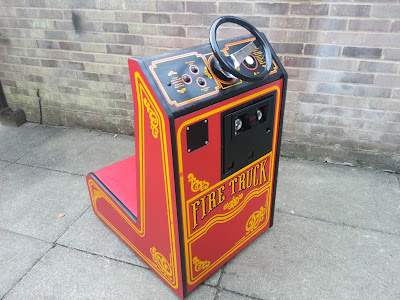 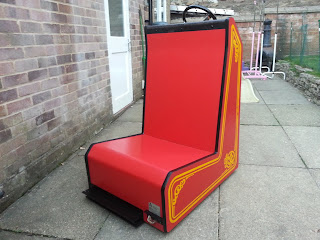 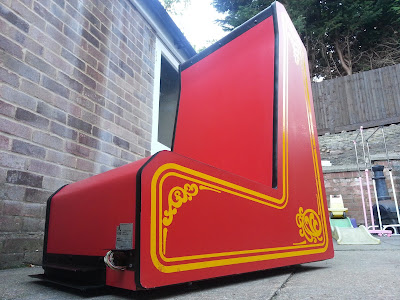 Since the last update I have also resprayed the bolts that hold the 'Horn' button in place as well as the rounded head bolts that go through the control panel, even though the Control Panel isn't in great condition these items looked out of place in their original condition.

Finally, Andy from Andys-Arcade is in the process of looking at the game board. Hopefully it won't be a too painful repair for him, I'm really looking forward to making progress with the main cab now.
Labels: Arcade, Atari, Fire Truck, Restoration, T-Mould
Newer Post Older Post Home