I recently fixed a Sega Choplifter PCB. Its a System 2 board that I picked up a few years back.

From a quick visual inspection it was clear IC 152 & 153 we smashed and needed replacing. I'm not sure what had happened to them, they were half de-soldered on the underside and half missing as if they have be smashed up due to bad storage. I removed the leftovers of the broken bits and fitted two replacements. IC's positions in question, ready for a sockets and new parts. 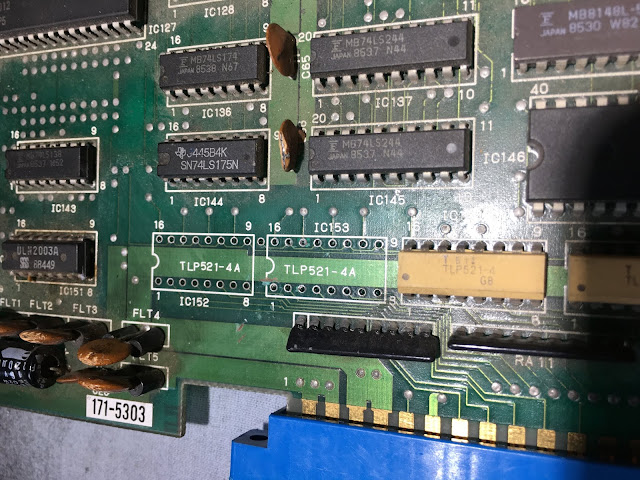 After fitting replacement parts the self test ran and stopped with and Error for IC91. This is one of the CPU ROM's. After removing the ROM from the socket I could see the socket itself was caked in grime, I cleaned the socket and ROM legs and the game booted. Good news time to play a game...

Well it turned out the There were no sprites in the game, no nothing, couldn't really play a game. I also noticed in attract mode the helicopter and game title on the main screen was missing. 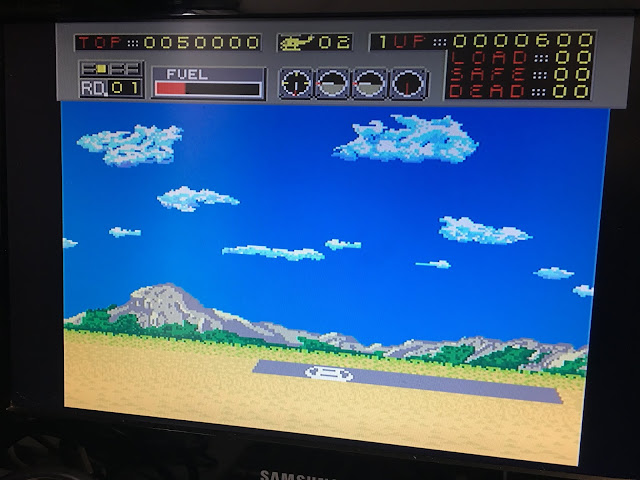 I did a bit of Google Kung-Fu and found a few forum posts about the PCB but nothing specific like the fault my PCB had.

I used the MAME source file to check which ROM's contained sprite data, with my trusty logic probe I went round checking various pins using the schematics. I honed in on the two banks of RAM that I had traced signal for the original Sprite ROM's, 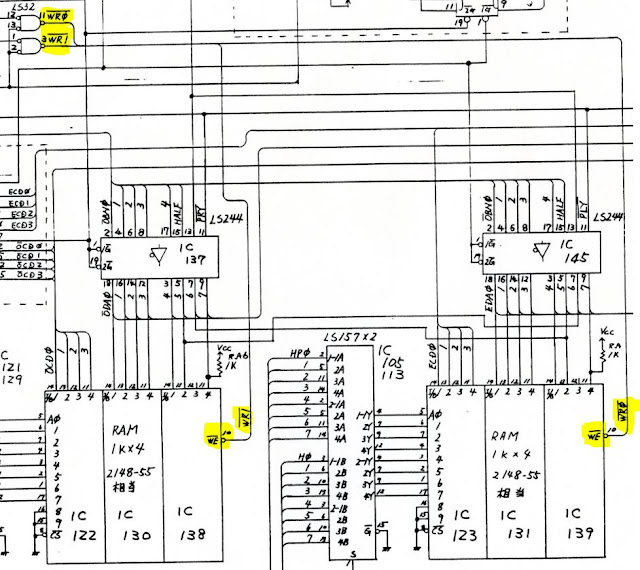 The fault turned out to be a 74LS32 logic OR gate. which was located at position IC107, this logic is used to control the Write Enable signal for the Sprite RAM. inputs to the Logic gates were happily toggling away but the output was always low and the I could tell by the way my probes LED was lit that something wasn't happy. The output should have been toggling but it wasn't. Piggybacking the IC with a known good chip didn't fix the problem and actually made the screen image worse but  still convinced it was at fault, I removed the suspect IC, fitted a new socket and replacement IC. The sprites were now back looking good! 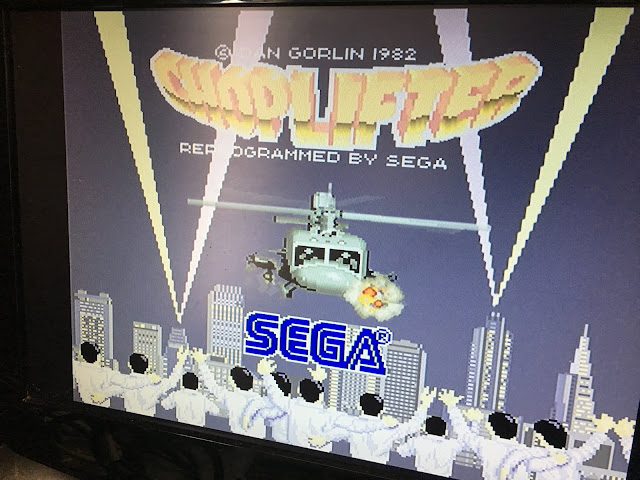 Well good until the Tanks showed themselves, they came on to the screen with vertical lines running through them as shown below. 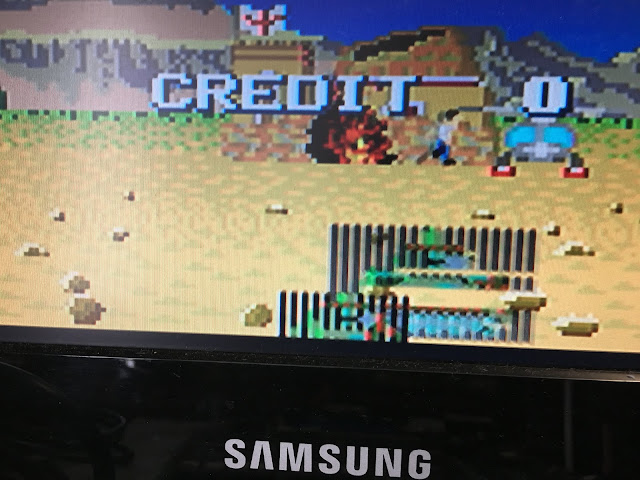 I decided to remove the other ROM's that deal with sprites and found pins 14 & 15, (the bottom two on either side) had been bent over when fitted in the socket at some point. 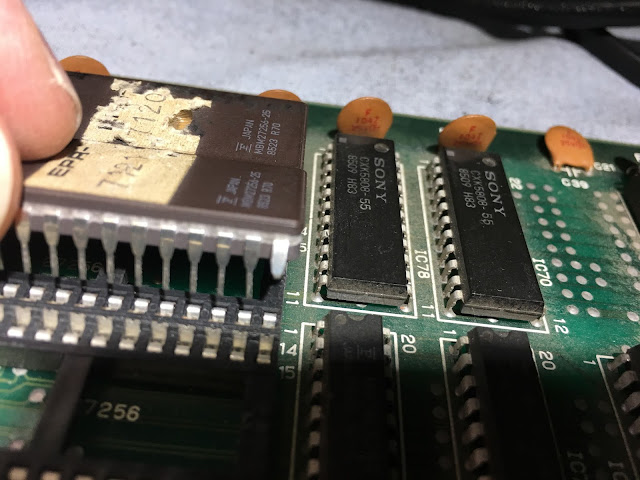 Two minutes later after using some long nose pliers, the legs were straightened and the ROM refitted. This fixed the problem with the lines running through the Tanks.

The final thing I had already noticed was that the sound was badly distorted and quiet, you could hear all the sounds but something wasn't right. After a closer inspection of the sound section, I could see the audio amplifier has previously popped with a section of IC missing.

A Wonder Boy PCB came to the rescue as a temporary donor for a replacement amplifier. 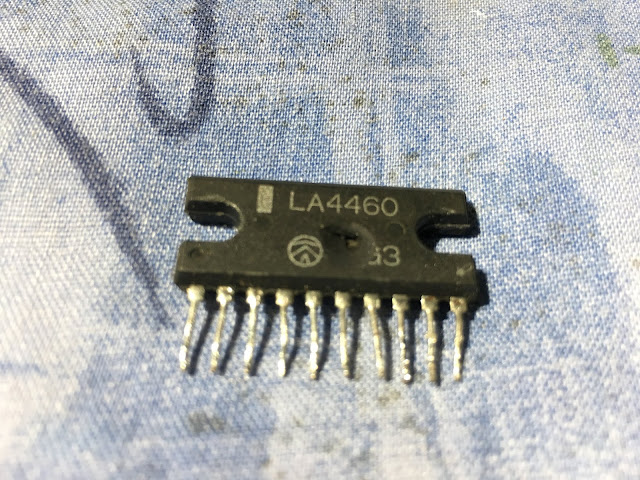 Once fitted all sounds and music played fine and that was it PCB fixed. 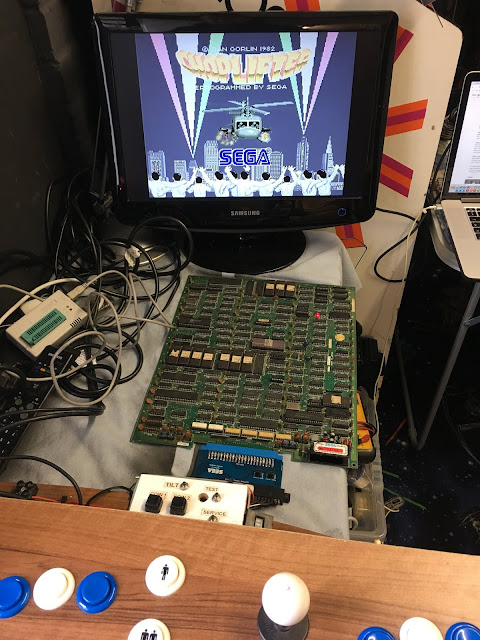