Well after my last PP fix a short while ago everything was looking good and the game played fine until last week when I was shuffling my cabs around in the garage arcade... When I turned the cab on for someone to play (Hi Chris!) The road had again decided to fail. It looked like the track edge (red & white stripe) was covering the grass on the left side of the track, there was also something going on at the right side of the track edge. 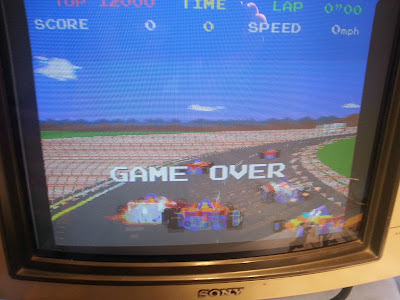 I quickly swapped out the socketed custom IC's which are responsible for the track being displayed, it wasn't any of those :(
After a checking some more signals I previously looked at with my logic probe I moved to the area in the schematic labelled 'Roadway Memory and Adders'. From the descriptive name it could certainly be an area I needed to look at. Not long into checking signals, I came across signal 'Σ3' (Sigma 3) which is an output from a 74LS283. There are six of these 'Sigma' signals which are mixed in a 74LS298 with some other signals, the output from that LS298 are the address lines of the graphics ROM which contain the track data. Signal Σ3 was stuck always high in comparison to the other Sigma signals which were pulsing away. I removed the IC put in a new socket and with a new IC inserted we were making progress! In honesty I thought this was going to be the 'fix' for the board, but it was apparent there was now something else wrong as shown below. 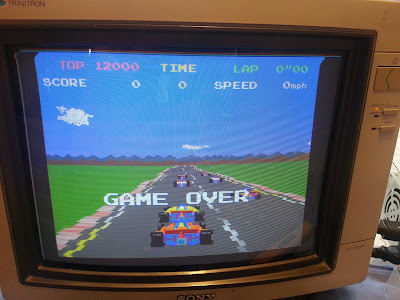 As you can see above the vertical lines in the track were staggered (i.e. Centre line in track dividing each half) I moved to the schematic section labelled 'Picture Data Memory Address Modifier' and quickly found an LS157 at location 4H with an output that was dead. The signal name was 'MUX2' and this is an input into one of the Custom IC's at location 5L. ( If this custom IC is removed the whole track will disappear) I removed the LS157 fitted a new socket and IC and we have a working Pole position again.
Newer Post Older Post Home